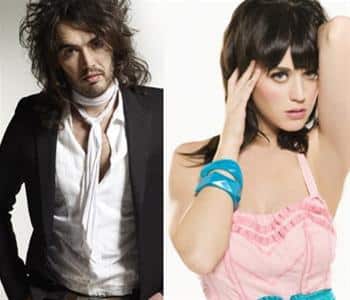 The couple have spent the festive period holidaying in India, with Russell
reportedly popping the question on New Year’s Eve.
“The wacky pair – who’ve been dating since September 2009 – became betrothed
five days ago while on holiday in Jaipur, India. A pal says that Brand, 34,
proposed with a ring, and that Perry, 25, happily accepted,” reports Us
Weekly magazine.

Rumours had been rife Russell was planning to ask Katy to marry him after he
was spotted perusing diamond rings in an upmarket London jewellers. He was
so determined to pick the perfect band he tried a handful on, and spent time
gazing at each of them on his own finger.

Russell surprised Katy with the India trip after she mentioned how much she
would like to visit the country when they went out for dinner. “It was his
Christmas gift. She told him how much she loved Indian culture while they
were eating curry in England, so he surprised her,” a source explained.
Both Katy and Russell have been open about their feelings for each other,
with Russell admitting Katy is the only girl to ever win his heart.
The famous womaniser has even met Katy’s evangelical Christian parents Keith
and Mary Hudson, who both hinted they thought a marriage might be imminent.

Kim Cattrall lost five kilos for Sex and the City 2.

The 53-year-old actress plays man eater Samantha Jones in the movie sequel
about four friends living in New York. Her character is believed to get
married in the new instalment, and Kim wanted her famous figure to look
better than ever.

“Going back to play Samantha – with the story line I have – I wanted to look
really fit,” Kim said. “I lost 10lbs by eating a little less over three
months, and I have kept it off.’

Kim is committed to staying slim, but insists she doesn’t care as much about
other aspects of her appearance. She likes her ageing face, and would never
want to look like her 24-year-old actress friend Carey Mulligan.

“I don’t want to look 19,” she told Britain’s Daily Mail newspaper. “I don’t
want to look as perfect and beautiful as my fabulous Carey Mulligan. I like
the way I look. And when I look at my mom I have less to be frightened of –
I am blessed with her cheekbones, and those help.”

Even though she is pleased with her looks, Kim hates Hollywood “ageism” and
the way it makes women feel unattractive.

She said: “I think Dame Helen Mirren, Dame Judi Dench and Janet Suzman look
fabulous, full stop. I hate the way people qualify ‘you look good’ by adding
‘for your age’. I am on a campaign against that.”

The 17-year-old actor – who shot to fame playing muscular werewolf Jacob
Black in The Twilight Saga – has reportedly signed a $7.5 million deal to
star in Tom Cruise’s new film Northern Lights. Movie insider Nikke Finke
claims no other teen icon, including High School Musical star Zac Efron and
Hannah Montana actress Miley Cyrus, is paid that much to appear in a movie.

Nikke said: “That money now makes Taylor Lautner the highest paid Hollywood
teenage actor around. I’m told that neither Zac Efron nor Miley Cyrus have
ever gotten a salary even close to that for their films. Amazing!”

In Northern Lights, Taylor will play a gifted young aerobatics pilot who
“faces off” with his billionaire father and falls in love with a female
pilot. John Moore will direct the film and production is due to begin in
April.

Miley Cyrus has spent a week in Australia with her boyfriend and his
parents.

The 17-year-old singer-and-actress arrived at Melbourne airport last week.
Australian actor Liam Hemsworth, 19, met her there and the pair travelled to
his parent’s home on Phillip Island together.

Once there, Liam and Miley enjoyed a low-key break with his parents Craig
and Leonie, spending their time walking on the beach, having coffee and
touring a local winery.

A few days into the trip, Miley was overheard telling her father Billy Ray
Cyrus, how much she was enjoying herself.

A source told Australia’s Herald Sun newspaper: “She was telling him what a
beautiful place Phillip Island was and how much she had fallen in love with
it. And she was very keen to tell him how nice it was to be able to enjoy a
holiday without the usual media frenzy that follows her, and was really
enjoying the anonymity.”

Miley and Liam also attended the local Pyramid Rock Festival on New Year’s
Eve, with other partygoers claiming the teen star acted like any other young
girl.

“She was wearing a T-shirt, a bikini top underneath and denim shorts and
honestly looked like every other teenage girl that was there,” one onlooker
said.

Staff at a local cafe were also impressed with Miley’s down-to-earth
personality.

One said: “It was really fantastic to have her here. The Hemsworth boys are
regular diners here and it was nice they brought her along. She was really
sweet and said hello to everyone. She seemed like a lovely girl and had no
problem blending in with the crowd.”

Rachel Weisz has been voted the women most men want to
marry.

The 39-year-old actress topped the poll of Esquire magazine readers. She is
engaged to director Darren Aronofsky, with who she has three-year-old son
Henry, and admitted she was astounded to have scooped the title.

She said: “Oh my God! Really? That’s so funny. I’m marriable. But I’m not
married! I was getting worried that the men didn’t like me any more, but
your readers’ poll puts my mind at rest!”

Pamela Anderson acted like a “space cadet” at a New Year’s party.

The star hosted the Gridlock New Year’s bash at Hollywood’s Paramount
Studios last Friday. She shocked partygoers with her outlandish behaviour,
which included letting her nipple slip out of her top during a toast.

“Pamela is a total space cadet,” a source told FOX411.com. “She appeared
really out of it.”

Pamela, 42, suffered the wardrobe malfunction while raising a glass to
American Idol star Adam Lambert. Although she insisted the slip was a
genuine mistake, it has been claimed she engineered it to get publicity.

She is said to have spent most of the evening tottering around the venue
chatting to guests and screaming about one woman she had seen who had bigger
breasts than her. The blonde star was eventually so keen to make a quick
exit she almost knocked a worker off their feet as she left.

It isn’t the first time Pamela has suffered an embarrassing problem with her
clothes. She appeared in the Vivienne Westwood fashion show in Paris last
year, and her dress slipped to reveal her breast as she was on the runway.

Lady Gaga and Pink will perform at the 2010 Grammy Awards.

Gaga has received five nominations, including Album of the Year for her
record The Fame. Pink is up for the Best Pop Vocal award for her album
Funhouse, and Best Female Pop Vocal Performance for her song Sober.

Dave Matthews Band, whose Album of the Year nomination for Big Whiskey And
The Groogrux King was one of the biggest shocks, will also take to the
stage, along with Green Day and Zac Brown Band.

Other artists who have already been announced as performers on the night
include Beyonce Knowles – who is up for 10 of the prestigious prizes –
Taylor Swift, The Black Eyed Peas, Maxwell and country group Lady
Antebellum.

All the nominees for Album of the Year will now perform, with Beyonce
Knowles, The Black Eyed Peas, Lady Gaga, the Dave Matthews Band, and Taylor
Swift battling it out for the accolade.

The ceremony is due to take place on January 31 at Los Angeles’ Staples
Center.

Robbie Williams is set to wed on Valentine’s Day.

The singer proposed to his long-term girlfriend Ayda Field in Los Angeles
last week. He has told her he is keen to tie the knot as quickly as
possible, and is considering having the ceremony on February 14 as he thinks
it will be romantic.

“Robbie doesn’t want to have a long, drawn-out engagement,” a source told
Britain’s Daily Star newspaper. “When he gets something in his head, there’s
no stopping him.

“He’s asked all his friends and family to keep the entire week free leading
up to February 14, so they can have a week-long celebration before
Valentine’s Day.”

Robbie, 35, hopes to wed 30-year-old Ayda in Santa Barbara, and has already
started looking for a venue. He is also in the process of convincing his
former Take That bandmates – Gary Barlow, Mark Owen, Howard Donald and Jason
Orange – to sing at the reception.

The source added: “He has asked his best friend Jonathan Wilkes to be the
best man and it’s likely his old bandmates Take That will perform.”