I Told Everyone The Truth For A Week. Here’s What Happened.

From being scolded as a kid for lying about stealing from the cookie jar, to confessing that the dog actually didn’t eat our homework, to getting busted for underage drinking in our teens, we’re told from an early age that honesty is the best policy. And as a kid, telling the truth actually works – most of the time.

However, the complexities of adulthood make it practically impossible to tell the truth 100 percent of the time. After all, are you really going to tell your boss you were late to work because you were flirting with that hot barista, when you could blame it on a traffic jam instead? Would you dare tell your friend on her wedding day she looks dreadful in her dress and you suspect her husband is a sex addict? Hell to the no.

But what would happen if we really did tell the truth all day, every day? Would our lives implode? Would we lose our jobs, ruin our relationships, and wind up a heaving, sobbing mess? Or would we have clearer minds, stronger relationships, and a less convoluted view of the world? In an effort to discover just that, I decided, for one week only, to tell the truth: the whole truth, and nothing but the truth. And, let’s just say it was eye-opening.

What struck me in the first few days was just how often we humans actually do lie. Research even proves it. In a 2002 study by the University of Massachusetts, 60 percent of research participants lied at least once during a 10-minute conversation. Subjects told an average of three lies per exchange. Interestingly, when confronted with how many lies they’d told (by actually being shown the recorded conversations), participants were shocked. Apparently, they all expected to be part of the 40 percent who remained truthful.

I never realized just how many untruths come out of my mouth in a 24-hour period until I started counting them. Not giant fibs; just little things. Like saying I’d already done the grocery shopping when I hadn’t yet, or telling my gym buddies I was avoiding sugar when in fact I’d chowed down on cake the night before. But this week, all of that came out in the wash.

So what happened when I laid it all out in total honesty? Much to my surprise, absolutely nothing. Nobody worried the groceries weren’t bought; I could do it later. Turns out three more of my gym buddies had also broken their healthy eating regimes at some point prior to our training session and were relieved to know they weren’t the only ones. As for being tardy owing to epic barista flirting, my boss laughed, rolled his eyes, and said he probably would have done the same thing.

Another happy byproduct was that I wasn’t late for any social engagements, and I never pulled out at the last minute, because I knew I couldn’t lie about why I was running late or flaking. Who cares if, on day four, I was exhausted and had a headache after working late? I still had to make an appearance at my friend’s birthday party, even though I actually didn’t like her that much and was only invited because the rest of our clique was. I arrived on the dot, and you know what? After a couple of epic cocktails, I actually had a pretty damn good time. 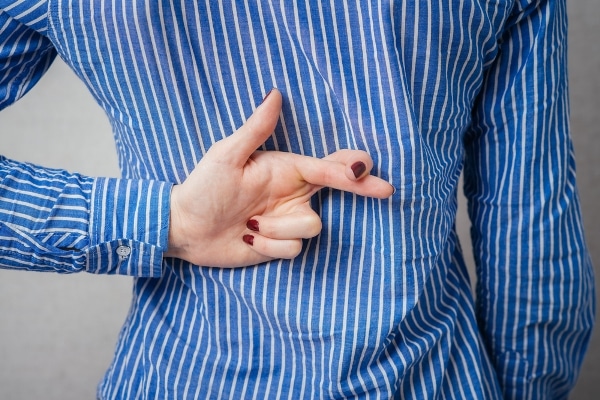 But the real challenge came on day six. Every month, one of my girlfriends hosts a lasagna-and-games night. She looks forward to it for weeks, and we all generally have a fabulous time. However, despite the frivolity of the evening, there’s always one catch: I hate her lasagna. Like, really, really hate it.

The mince is always too sloppy, the pasta is never cooked properly, and there’s nowhere near enough white sauce. Plus she overloads the thing with enough cheese to clog your arteries for a month. The result; a glumpy, runny, semi-nauseating mess. Of course, I’d never told her this. It was her late grandmother’s recipe, and needless to say, she has a certain emotional attachment to it. What else could I do but accept it with a big (but forced) smile? However, this occasion would be different.

We were all sitting around the table, chatting merrily, when my friend brought out her signature lasagna. I swallowed, preparing my stomach for the onslaught. As she pranced around, excitedly serving it, I stopped her when she went to put a too-large portion of the yellow sludge on my plate.

“Half of that will do,” I said with a smile.

“Why? You don’t have to diet tonight!” she replied, laughing.

“No, really, I actually don’t want any more,” I reiterated.

“How come?” she asked, puzzled.

I was silent. This was the part where I’d usually say I’d had a big lunch, or wasn’t feeling well, or any other wild imagining I could think of to get out of eating it. But I didn’t have that luxury. I could feel the sweat beading on my forehead, and I was sure my face was flushed. But I was committed to my experiment: there was nothing else to do.

“Because I really don’t like your lasagna,” I finally blurted out. “In fact, I kinda hate it.”

There was a stunned silence. Nobody in a million years would expect me to slam the sacred family recipe. My friend stared at me blankly, the ladle, covered in lasagna, still hovering above my plate in her hand. Eventually, she spoke.

“Oh, thank God!” she said, plonking the ladle back in the dish.

“I was so freaking sick of making it. I hate that damn recipe! Why didn’t you tell me ages ago?”

After an uncertain pause, we all burst out laughing. Turned out nobody else liked her lasagna either.

So what did I learn? Ultimately, the lies we tell to diffuse a situation actually complicate it further. Although it sounds clichéd, one little lie leads to another, and another, until the web of untruths becomes impossible to navigate. Yes, a white lie might save you in the moment, but in the long run it won’t benefit you, or anyone else.

Placating people doesn’t solve anything. It simply limits your ability to problem-solve. And aside from anything else, people actually appreciate honestly, regardless of how initially uncomfortable it may be. So why not spend a week, a day, or even an hour telling nothing but the truth? You never know what you might discover about yourself – and other people.*

Comment: What’s the worst lie you’ve ever told to save face?