Rape remains one of the most under-reported crimes in the world.

After decades of secrecy, comedian Bill Cosby has finally been arrested for the sexual assault of former Temple University employee Andrea Constand. Cosby allegedly incapacitated her with alcohol and drugs, and digitally penetrated her while she was unable to refuse or fight back.

He appeared in court on December 30 in Elkins Park, Pennsylvania, where he was formally arraigned on one charge of aggravated indecent assault. Although the assault was reported in 2004, the arrest comes after over a decade of civil suits, settlements, and testimony from anonymous witnesses.

Following the notorious stand-up routine in 2014 by comedian Hannibal Buress, who publicly ousted Cosby for his gross sexual misconduct with multiple women, more than 50 alleged victims have come forward with similar accusations to Constand. The accusations involve everything from forced oral copulation to non-consensual vaginal penetration.

Many of Cosby’s victims were young performers, eager to make it in the entertainment industry. Cosby gained their trust as a mentor, then lured them into hotel rooms and drugged them with Quaaludes before raping them. Others were threatened with having their careers ruined if they refused him.

However, Constand and Cosby bonded over his other passion; Temple University basketball. Cosby was the university’s most prominent alumni and provided significant financial backing. In 2006, he testified in a deposition that he was attracted to Constand from the moment he saw her at a Temple game. He soon asserted himself as a mentor, and she frequently visited his mansion in Cheltenham to discuss her career.

One night, Cosby gave her three blue pills and red wine when she complained of tiredness. She awoke at 4am the next morning with her sweater bunched up and her bra undone. Cosby, dressed in a robe, gave her a muffin and sent her on her way. Cosby testified the encounter was consensual and romantic. However, Constand disputes this, on account of the fact that, aside from anything else, she is a lesbian. Ex-model and TV personality Janice Dickinson gave an eerily similar recount of the horror she endured at Cosby’s hands in a haunting 2014 interview with Entertainment Tonight.

However, a couple of uncomfortable questions remain. Why were Constand and Dickinson coerced into silence in the first place, and why did none of the other victims come forward at the time of the crime?

The answer to both is simple; in an inherently patriarchal justice system, rape is simply not given the same emphasis as other equally heinous crimes. Women live in fear of being slut-shamed, accused of provoking or encouraging the attack, or being told they are liars.

However research proves there are actually very few false allegations of rape. Therefore, it’s beyond disturbing that 97 per cent of accused rapists are not imprisoned. In addition to this, only 32 per cent of sexual assaults are actually ever reported. Many victims wait decades to speak up, by which time, given the strict statute of limitations in place for sexual assault in the US, it’s too late to prosecute the perpetrator.

This is glaringly evident in Cosby’s victims. The first alleged attack took place in 1965, a time when the idea of sexual harassment and assault wasn’t nearly as prevalent as it is today. Victoria Valentino, a former Playboy playmate who was allegedly assaulted in 1970, sums it up best, “What kind of credibility did I have? In those days, it was always the rape victim who wound up being victimized. You didn’t want to go to the police. That’s the last thing you wanted to do back then.”

Despite the frequent professing of society that we are moving beyond this attitude of victim blaming, the stigma surrounding rape victims remains. Woman are still not only encouraged to downplay their experiences, they’re also encouraged to make excuses for the bad behavior of men. You only need to look at the absurd case of a Saudi rapist in England who was acquitted on the grounds he “fell into” his victim’s vagina to see the skewed nature of the law, and the bias of those who enforce it. 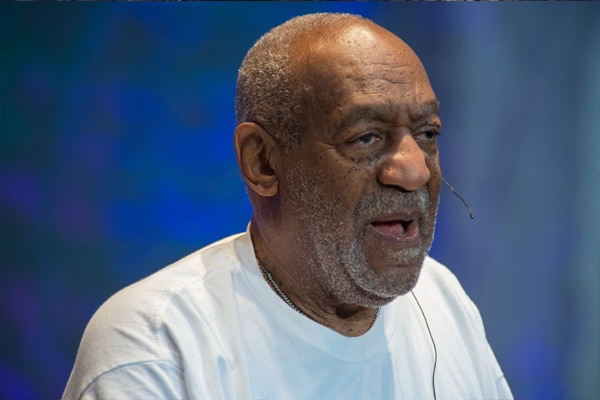 This instinct to victim-blame in cases like Cosby’s is accentuated by rape culture, which, regardless of how society buries its head in the sand, is an actual thing. Listen to any song by Robin Thicke or Redfoo and you’ll get a fabulous example. Lyrics advocating the existence of “blurred lines”, and songs telling women who protest sex to “shut the f*** up” are permeating the minds of too many men and boys. This reinforces the idea of consent as something to be interpreted. As for women; they are unassumingly coerced into believing sex and sexuality should always be dealt with on a man’s terms. If not, they’re made to believe they’ve done something wrong.

No wonder less than a third of sexual assault victims report the crime.

It’s already extraordinarily difficult to build a case proving the guilt of a perpetrator ‘beyond reasonable doubt’. As sexual assault is usually a private affair, the lack of witnesses, and all too easy discrediting of victims adds another muddy level to already murky waters. Why the hell would a woman put herself through the trauma of reliving the worst experience of her life when there’s a huge risk it will remain a fruitless exercise?

Cosby’s victims failing to speak up highlights the large and very ugly root of the problem. Their silence is not because they said yes and later regretted it, it’s because these women knew, deep down, the justice system would fail them. And that is perhaps the saddest part of this story of all.

Comment: Do you think the treatment of rape victims by the justice system needs to change?