I Tried Being A F*ckgirl For A Week. Here’s What Happened.

It’s not easy being easy… 😉

I spent so long as a serial monogamist, I never really learnt to get in touch with my wanton random sex goddess self.

I’m a massive empath and find it really hard to act with a “me first” philosophy.

None of this is to say I don’t love sex. I do; I’m very in touch with my own body and I have no trouble asking for what I want between the sheets. But that’s usually in a relationship, or with an FWB whom I already know and trust. Acting like a ‘fuckgirl’ is a pretty foreign concept for me.

So of course, the next logical step was for me to put myself to the test and see if I could be a fuckgirl for a week to discover what would unfold, because, journalism.

Great idea, Liz, absolutely NOTHING can go wrong with this plan…

Getting down to business

I found much more about fuckboys than fuckgirls.  In short, a ‘fuckboy’ is a man who sleeps with women without any intention of having a relationship with them. or even walking them to the door post-coitus. He’s a womanizer, with little to no empathy, and most likely the epitome of a man child.

Well, that wasn’t very encouraging. Maybe girls would be different?

According to my research, to be a fuckgirl, I needed to put my emotions on hold for the week and focus exclusively on sex, and getting what I wanted, when I wanted it. The fact I blushed merely thinking about this did not bode well for my week ahead.

Most articles seemed to agree on a few things: fuckgirls like sex…a lot; they love attention and will sometimes lead people on for the ego boost; they have a bunch of men on call for when they want their needs met; and they don’t do cuddles or feelings.

Since I didn’t have a bunch of men on call, this was going to require some groundwork.

I matched with a bunch of guys on Tinder, and shut my heart down for the week. Fuckgirl Liz gave no shits if his interests matched hers. She was going to breadcrumb the crap out of these guys until she needed something, then pounce.

I swiped with abandon, and sent the same messages to all my matches, carefully teasing but offering up little information about myself. But as much as I was meant to be all about sex, I couldn’t bring myself to sext right off the bat. I get dick pics all the time, and guys have zero trouble telling me all about how big their penises are (*sigh…*), but I just couldn’t go there. I settled for mysterious and alluring instead, throwing out ‘You’ll just have to wait and see’ and ‘Wouldn’t you like to know ;)’.

I realized there were a lot of winky faces involved in acting like a fuckgirl. I also realized I LOVE the attention. Feeling this desired felt really good, as did putting myself first. I began to completely get the allure of this world…

I set my Tinder guys aside for later. Some tried to message me through the week, but I gave only one-word answers, and just paid them attention when it seemed like they were going to leave me. I swung wildly between feeling super powerful and feeling kind of crap that I was essentially having no regard for what these guys wanted.

Next it was time to hit up the fuckgirls’ natural habitat: the bar.

My research told me fuckgirls never pay for their own drinks, instead preferring to flirt for them, even if they have no intention of sleeping with a guy at all. This made the feminist in me arc up, because I’m a firm believer in paying your own way unless you already know you’re interested in a person. But this experiment had to be scientifically accurate… or something. So I sauntered up to a guy texting on his phone sitting at the bar…

Apparently I was supposed to use intense eye contact, look hot but innocent, and be prepared to flirt. I adopted what I thought was a seductive look. The guy just stared at his phone. And stared. And stared. I slid a little closer to him. Nothing.

“What does a girl have to do to get some attention around here?” I finally quipped.

He looked up and… laughed, apologizing.

“Just texting some slack mates who are meant to be here.”

SCORE! Well, sort of score. He didn’t want me to leave, but he still hadn’t bought me a drink, which was my initial goal. I thought about skirting the topic until I remembered I was trying to be a fuckgirl and should just demand what I wanted.

“You should buy me a drink,” I said, swallowing down the quiver of fear in my voice.

There was a half-second pause before he replied, “Yeah, I really should,” and did a cute half-smile thing. 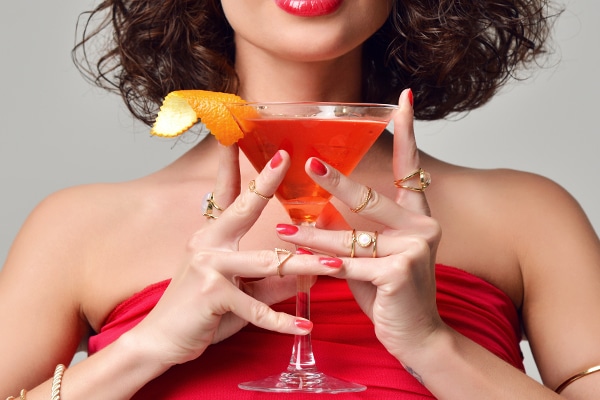 WIN! Inner Liz did a ridiculous happy dance. Outer Liz remained cool, calm and collected, as if I totally knew this was going to happen and deserved this drink (and pretty much everything else in the world, too).

My euphoric feeling didn’t last long, though. As we started chatting, I began to feel like my mouth was writing cheques my body couldn’t cash. He was coming on really strong in a mega sexual way, probably to match my fake persona; and I felt a bit weird about it because I didn’t actually know him at all, and didn’t really want to sleep with him.

Luckily one of the things on my list of ‘Fuckgirl things to do’ was to lead a guy on with no intention of following through.

I managed to get a second drink out of him before he asked me if I wanted to dance.

“Oh, nah I have to go meet my friends now. Nice talking to you!” I said before fleeing, my heart thudding in my chest.

I felt totally awful. On the one hand I really liked the whole confidence thing at the start, but then I felt pretty shitty about getting the second drink after already having decided to ditch him.

When I got home, I realized I’d missed out on the “fuck” part of being a fuckgirl. Time to put the groundwork to use: it was booty call time. I mass-texted a bunch of my Tinder matches with ‘U awake 😉 ?’ and had a mini panic attack when ALMOST ALL OF THEM GOT BACK TO ME.

It was at that moment I realized that, although I do want sex (very much), I might have been in a little bit over my head. I didn’t know any of these guys. What if they wanted to stay over and I didn’t want them to, but they wouldn’t leave? What if they came over and I changed my mind? What if they were axe murderers who wanted to chop me up into little pieces and feed me to their pet chihuauas? It hit me that, experiment or no experiment, I didn’t really want to have sex with a total stranger. Like, at all.

Which pretty much means I am the world’s worst fuckgirl.

But I did still want to get laid, so I texted my FWB to come on over and we had a very sexy night, both of us ending up extremely satisfied. And although we sometimes do cuddle after sex, I figured I should at least try to stick with some of the experiment.

I slapped his upper thigh and smiled “Welp, thanks for that!” before rolling over and going off to sleep. Small win?

I am still not a fuckgirl by any definition, but there were certain things about this experiment that really sat well with me. Knowing I had to exude confidence for the experiment to work almost completely got rid of my dating anxiety. It was a real “feel the fear and do it anyway” moment.

I will definitely be embracing my newfound philosophy of “I’m amazing and I deserve this” to push myself through the dating gauntlet. But I don’t plan on ditching my empathy and putting my wants first at the expense of pretty much everyone else anytime soon.

Comment: Are you more fuckgirl or serial monogamist? Why?