Trump Has Doubled Down. Prepare To Be Terrified.

How has he even made it this far?!

In the wake of tragedies like the shooting at Pulse in Orlando, there’s traditionally a unifying period among warring communities. However much we disagree, there’s a moment in which we all understand that no matter where we are on a particular political issue, the action in question was unacceptable. That a mass killing of people who were just out having a good time, that dozens of sons, daughters, partners and friends were wiped out in a blink, is a horrific event that deserves a moment of silence.

While several GOP members offered useless thoughts and prayers – an act that means next to nothing after decades of legislation that ensures crimes like this are possible – Donald Trump was not content to follow the party line. It’s hard to tell if he’s serious or just so out of touch with reality that he doesn’t realize how incredibly damaging he is and would be to the LGBTQ community but, shortly after the massacre, the man actually had the audacity to instruct his audience at an Atlanta rally to “ask the gays” about who they’d choose: him or Hillary Clinton.

It’s certainly true that there’s still plenty of back and forth between Bernie Sanders and Clinton supporters, not to mention those who support third-party candidates, but I’d like to think the one thing we can come together on is the fact that a Trump presidency would be horrific. 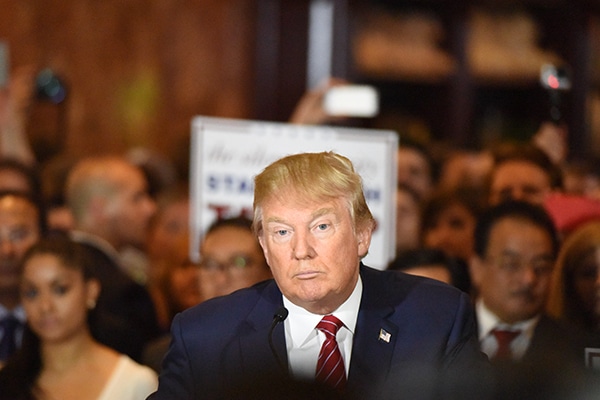 In his rush to grab at the opportunity to be heard after one of the worst attacks our country has seen, Trump basically just made stuff up. He out and out said Clinton wants to disarm all Americans to allow Islamic terrorists the opportunity to kill us.

While Clinton has spoken in favor of stronger and universal background checks for firearms purchases, she’s never said a word about removing the Second Amendment entirely. And, frankly, if all it takes is a background check to eliminate someone’s ability to access guns, they probably shouldn’t have them in the first place.

He also made a point of calling out the attacker in the Orlando shooting as “an Afghan” as a way of trying to push the danger of an immigrant – which he wasn’t. The shooter was in fact born in New York, but his skin color and his name were proof enough for Trump.

And just in case you thought his radical xenophobia was a passing fad, think again. He doubled down on his belief that all Muslims should be banned from immigrating to the United States by not only reiterating that but also broadening the criteria. Now he believes anybody from any country with a history of terrorism should be barred from traveling to America, which not only implies all Muslim countries house terrorists but has the added bonus of implying other countries don’t. Somebody ought to buy him a history book and tell him the bad news about Ireland, Italy, Greece and a ton of other countries his supporters likely hail from.

Trump is not a friend to the LGBTQ community and he never has been. He opposes marriage equality, believes the issue of trans folks being able to use the correct restrooms is one that should be decided by individual states, and he supports the First Amendment Defense Act, which would prevent backlash from the federal government when discriminatory action is taken against LGBTQ people if the person or business that did so can prove they acted in such a way due to their religious beliefs.

Trump is an opportunist with no interest in facts. If given the power, he would absolutely take his knee-jerk reactionary rhetoric to a much more serious place – and that should terrify you.

Comment: Who will have your vote this November, and why?