Another week, another Trump controversy.

Donald Trump has once again taken to Twitter to attack Hillary Clinton, but this time his post backfired, big time.

The presidential hopeful tweeted an image depicting Clinton in front of a pile of money and next to – wait for it – a six-pointed star showing a strong resemblance to the Star of David, emblazoned with the words “most corrupt candidate ever”. 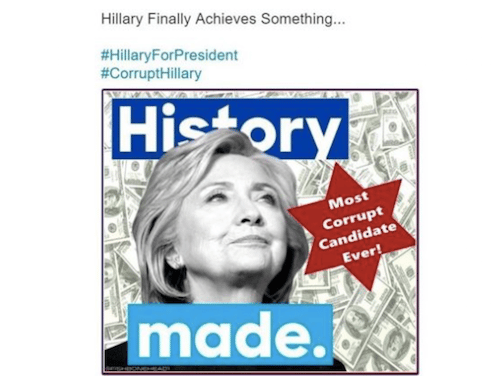 Twitter users quickly noticed the inappropriate, seemingly anti-Semitic post evoking stereotypical views of Jews, leading Trump to delete it and repost an altered version of the image, this time with a circle instead of a star.

Unfortunately for Trump, once something’s on the internet, it’s never truly gone, nor forgotten.

While Trump has since defended himself saying the star was meant to represent a Sheriff’s badge, it is highly questionable that he didn’t notice the anti-Semitic notion, as the original source of the meme was found to be a white supremacist forum, frequently visited by neo-nazis.

Moreover, the watermark on the original image points to an offensive, racist Twitter account which has since been deleted.

Whether Trump really was naive enough not to see the anti-Semitic message of the meme, and more importantly, what he was doing on an anti-Semitic forum in the first place, both leave large question marks over the Republican frontrunner’s already questionable political stance on a number of heated topics.

Either way, it wouldn’t be the first facepalm moment for Trump, so while this latest social media controversy is probably his worst yet, it’s unlikely to be his last.