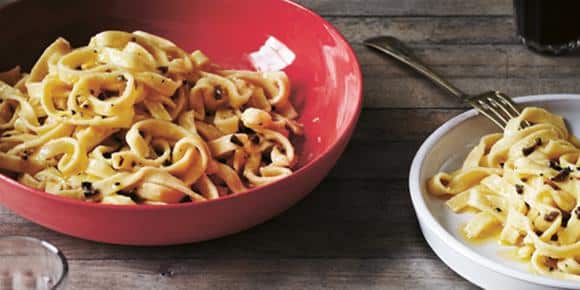 I don’t suppose there are many students who can claim truffl e pasta as their weeknight dinner of choice. After quitting my career as a journalist to undertake a Master of Gastronomy I found myself manning the phones at an Adelaide gourmet food and wine company called Bottega Rotolo. My partner, Tim, had also quit his day job to follow his own wine dream and we would joke that at least we would never starve with a vegetable patch in our backyard. And starve we certainly did
not. Not when I had a cheese room and a warehouse full of imported Italian goodies to play with. And so my hard-earned phone answering wage was spent on treats such as aged Italian parmesan (Parmigiano Reggiano) and fresh winter truffles imported from Italy. So it was, on many a Tuesday night, we found ourselves sitting down to a bowlful of fresh tagliatelle smothered in truffled butter.

For the truffle butter, place the butter and truffle pieces in a bowl and mix until well combined. Spoon onto a large piece of plastic wrap and roll into a thick bonbon-shaped log. Twist the ends to seal tightly and place in the freezer until firm.

Cook the fresh pasta in boiling salted water for 2–3 minutes, or until al dente.
Meanwhile, cut off a whopping chunk of frozen truffle butter, about one-quarter, and heat in a large saucepan over low heat until just melted.

Drain the pasta and add to the melted butter. Toss well, scatter over the Parmigiano-Reggiano and toss again. Pile into large bowls and scoff.

NOTE: Winter truffles are available from specialty providores. I prefer winter truffle to its summer cousin because it has a more intense flavour. For European winter truffles, you’ll need to wait until about December, while Australian winter truffles hit their straps from about June to August. The truffle butter recipe makes more than you will need. It will keep in the freezer for up to 6 months but use it sooner rather than later as the f avour becomes less intense.

What are you cooking tonight?