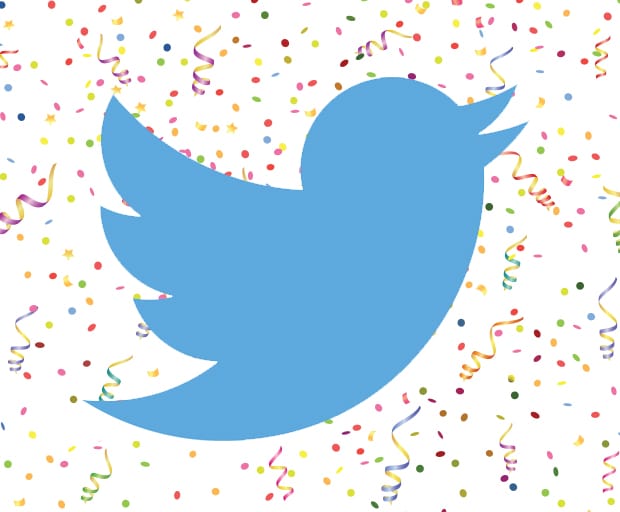 And it’s all to celebrate the tenth anniversary of their first tweet!

A decade ago today, Twitter cofounder and CEO, Jack Dorsey sent out his first tweet and subsequently changed the way the world would connect forever, making today the social network’s birthday. And although some people are choosing to be pedantic, pointing out that technically Twitter’s official birthday is on July 15, since it wasn’t available to the public until that date, we’re choosing to block out all the haters, join in the fun and celebrate the good times.

Twitter is commemorating the day with some awesome additions that are seriously entertaining and have got us excited about the future of the social media platform. Not only has it pimped out its own homepage with rad blue balloons…

Twitter has launched into full birthday mode by thanking anyone who is willing to like a post with an explosion of streamers and confetti. Unfortunately, though, the merrymaking ‘like’ button will only be around today, so get click-happy and celebrate!

Looking back over the past 10 years, it’s crazy to see the enormous effect Twitter has had on our lives. Not only has it brought about some serious entertainment with countless hashtag fails (our fave still being #SusanAlbumParty), it has also been home to some awesome celebrity feuds, Kanye’s amusing and offensive rants and, most importantly, it has been a platform for change.

So, as our way of celebrating, we’ve scoured 500-billion-plus tweets to find you the most amusing ones and the most powerful campaigns. Enjoy!

4 months ago i quietly left 57 dvds of ‘click’ at my parents’ house and they’ve still never noticed or mentioned it pic.twitter.com/j864rH9eG8

#MasculinitySoFragile you have to get your hair cut at Guy’s Men’s Salon pic.twitter.com/ZzibrRq7e0

4. This bit of relationship advice.

Relationships are mostly you apologizing for saying something hilarious

5. This piece of advice for all new parents.

STOP TELLING ME YOUR NEWBORN’S WEIGHT AND LENGTH I DON’T KNOW WHAT TO DO WITH THAT INFORMATION.

6. This hashtag, which sparked a global campaign.

Our prayers are with the missing Nigerian girls and their families. It’s time to #BringBackOurGirls. -mo pic.twitter.com/glDKDotJRt

9. This hashtag, which got men talking.

#AllMenCan be masculine without misogyny, chivalrous without demeaning, and feminists without fear. Equality benefits us all.

I’m not even gon lie to you. I love me so much right now.

Before we sign off, we just wanted to say, once again, thank you and congratulations to Twitter on a wonderful 10 years. Thank you for making history, for driving change, for bringing us breaking news and for letting us have a laugh. Thank you for bringing us closer together, for helping us lift each other up in times of need and, first and foremost, for allowing our voices to be heard.

Images and gifs courtesy of twitter.com.