Unpopular Opinion: Marriage Is For Idiots

If you’re an educated adult who has willingly chosen to enter into a lifelong union, you, sir, are a fool.

Marriage is for idiots.

I say this as someone who has been married and divorced all barely before hitting 30. (So yes, call me out on my bias if you like.)

Personal opinions aside, research into human relationships overwhelmingly indicates that, try as we might, we’re simply not built to stick with one person for life. And, I’m going to go a step further, by saying what many of us have contemplated but avoided voicing for fear of judgement: it’s not natural to have sex with the same person over and over again.

Studies show over one third of marriages are affected by infidelity, and one in five of us are cheating on our current partners, like, literally RIGHT NOW.

It’s not because we’re cold, unfeeling creatures incapable of love – conversely, human beings have the capacity to form incredibly meaningful, complex connections with one another – it’s simply that fidelity, at least not the kind that lasts decades, isn’t in our DNA.

I’m not saying this to excuse cheating. There is no greater betrayal than to deceive a loved one – it’s something I’ve personally been guilty of in the past and am still coming to terms with forgiving myself for – but to point out the incredibly insane odds of making it through a lifetime with someone, unscathed by infidelity. There’s literally a greater chance you’ll die in a plane crash than succeed in making it to your deathbed without having had at least one partner play around on you in the course of your life. So why on earth would you do it?!

The institution of marriage doesn’t even align with our modern values. We spend tens of thousands of dollars (some of us – *gulp* – more) to tell a bunch of family, friends, and people we barely know but whom Aunty Sharon insisted we invite, that we are going to let another human own us?! Have you ever truly sat and listened to traditional marriage vows? A priest, likely of a church you barely even attend, tells you to repeat after him, “I, ___, take thee, ___, to be my wedded husband/wife, to have and to hold, from this day forward”.

Read that again. “to HAVE and to hold”. The very idea that any one of us should be able to possess another person is archaic nonsense. It’s where ideas like a man being able to have constant access to his female partner for sex, or decide what she’s allowed to wear when she leaves the house, come from.

Not to mention the fact that, when these vows first came into popular practice, the average adult lifespan was 30 years. Now it’s 70. That’s more than two lives! If having another person stake their ownership of you for a decade was a bearable sacrifice back then, doing it for more than triple that now is just good old-fashioned masochism.

A study published in the Archives of Sexual Behavior revealed that, while most couples reported an increase in sexual satisfaction over the course of the first year of their relationship, that rating steadily declined the longer they were together, as did the frequency of sex. And research published in The Journal of Sex Research confirmed sexual variety as a leading motivator for 74 percent of unfaithful partners. Read: having sex with the same person for an extended period of time is really hard work. It’s why, if you Google “Ways to put the spark back in my sex life” (and as someone who’s been married for almost a decade, trust me, I have) you’ll be met with over 15 MILLION results. And if that’s not enough to fight your instinctive human urges to go and fornicate with someone new, the multi-billion dollar libido-boosting product market is here to help you get aroused by your partner again. They have pills, and creams, and sex toys, and genital pump gadgets that look like they belong in a horror flick, for that.

But don’t worry about that right now; you have a wedding to plan! This means you can focus all your energy into the important things, like napkins and centerpieces and where your warring cousins should sit. There’ll be plenty of time to let the reality sink in later, that no amount of doilies or floating candles can make up for the fact you’ll still be expected to keep “the spark” alive in 20 years time, when resentment and your hateful in-laws have settled in.

There’s just one glaring issue the wedding industry is really hoping you’ll overlook; weddings are the utter antithesis of the leaps we’ve made toward gender equality in the past decade. A woman dresses in white to symbolize her purity for her new male owner-to-be, is walked down an aisle to be “given away” by her father (because, after all, fathers should “own” their daughters’ body autonomy) and then, after literally pledging her life away, is told by another man (a priest) that her new owner can kiss her.

Stop and think about how deeply unhealthy that sounds. 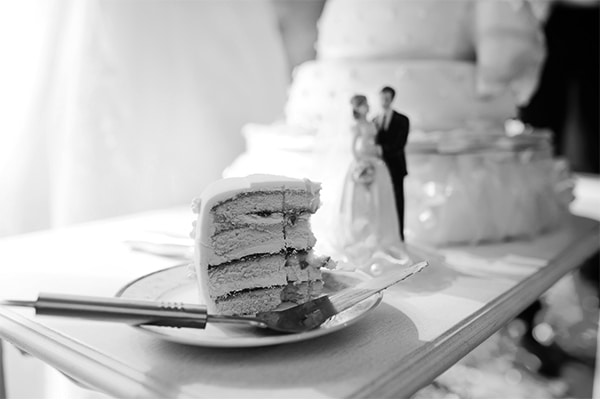 Wait, but what about tax purposes? Marriage is good for those, at least…right? Sure. Just so long as you don’t mind putting your entire financial stability on the line for someone else, who statistically has a 33 percent chance of screwing you over. Think of it this way: would you purchase a lotto ticket if there was nothing significant to be gained if you won, but if losing said lotto meant potentially forfeiting HALF your assets? No. And you’d likely view someone who did as a fool.

And yet, statistics show half of us roll the dice anyway, and end up getting divorced. Which begs the question – why do we do it?

I can already hear you screaming at the screen: FOR LOVE, YOU HEARTLESS HARPIE! WHAT IS WRONG WITH YOU? HAVE YOU NO SOUL?! (Mmm…possibly. But that’s for another blog.) Mainly though, I’m just a logic-driven person, and despite my desire to live out every Sandra Bullock movie I’ve ever seen, reality indicates the likelihood of finding – and then actually staying with – my Keanu Reeves is just like every Sandra Bullock movie I’ve ever seen: fantasy.

It’s not that I’m incapable of appreciating true love, or accepting the rare few who seem to have beat the Matrix and actually achieved lifelong monogamy. My own grandparents have been married for over 60 years and I can’t think of a happier couple, and for those of you wondering, yes, I have a boyfriend and we’re super smitten, thanks.

But times have changed since my grandparents stood in front of their families as barely post-adolescent lovebirds and repeated vows that made it socially unacceptable for them to part. There is no shame in walking away from a broken relationship today. I know that, because when I apprehensively confessed to my mom that my own marriage was over months after my husband and I had separated, her reaction wasn’t one of disappointment. It was one of relief.

“You’re still young. There’s no sense in staying in a situation for decades to come if it’s making you miserable, simply because you made a commitment,” she said, offering me a tissue over wine one night after work.

Her words came tinged with irony. I watched her endure unbearable misery for decades in a toxic relationship with an abusive man before she finally walked away. She’d been raised to believe that marriage was sacred, never to be dissolved, and something only the weak and selfish ran away from when the going got tough. It always seemed like a sick punishment to me, watching her best years stolen away from her by our abusive father, all because she had made a promise to him and signed a piece of paper.

I spent many nights in bed as a child, silently praying my mom would wake me with news that she and my father were divorcing, and I could start to learn who she was underneath the veil of depression his abuse threw over her. And my sentiment isn’t unique. Development psychologist Mavis Hetherington’s work, which followed 2,500 children to chronicle their mental health following their parents’ divorce, found an overwhelming 80 percent of kids were not negatively impacted it, whereas we know from research, kids who grow up in homes with a negative relationship model tend to deal with mental health and relationship issues later in life.

When you consider all of the above, it’s unsurprising we’ve started to embrace new relationship models as a society, like polyamory, open marriage, and – heaven forbid – long-term singledom by choice. New research confirms one in five of us have been in an openly non-monogamous relationship and 42 percent of us are staying single (on purpose!).

And yet, it seems our persistent prescription to the ideals Sandra Bullock rom-coms are made of is keeping marriage in business. While marriage is undoubtedly declining in popularity since its hay-day in the 60s when almost 75 percent of adults over the age of 18 had tied the knot, 48 percent of us are still saying “I do”.

So, if you’re one of them, good luck. You’re gonna need it!