Sometimes I’m not sure I do, either.

A woman laughs; her head turned away as the man next to her looks on, unsmiling. Between them are the words, ‘Spike your best friend’s eggnog when they’re not looking.’

It’s an ad from the 2015 Bloomingdale’s Christmas catalog, no doubt meant to be festive and light-hearted.

Maybe the writers were playing the song, Baby It’s Cold Outside when they dreamed up that piece of copy. In that holiday classic, a man tries to talk his lady friend into staying for another drink while she protests that she needs to go home; “Beautiful what’s your hurry? Mind if I move in closer?” he sings.

The Bloomingdale’s ad came under fire, and rightly so, for implicitly condoning date rape. And it seems every year around the holidays, someone writes a think piece about Baby It’s Cold Outside, calling it a “date rape anthem” and wondering why the song is still popular in this supposedly enlightened age, when we’ve all heard the term “enthusiastic consent”. 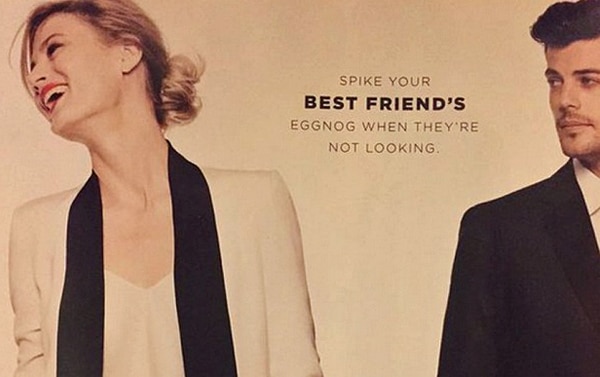 And yet, it seems most men still don’t know what that means.

Why would they? In Oklahoma, a 17 year-old boy was allowed to go free after forcing a 16 year-old girl to perform oral sex on him. Why? Because she was drunk and half-conscious, and Oklahoma’s forcible sodomy law doesn’t mention anything about unconsciousness or intoxication. Therefore, all charges were dropped.

“Forcible sodomy cannot occur where a victim is so intoxicated as to be completely unconscious at the time of the sexual act,” the court ruled. Sorry, what?!!

Unfortunately that’s just one recent case among many. The Rape, Abuse, and Incest National Network (RAINN) estimates 97 out of every 100 rapists go free; only twelve are even arrested, out of 46 who are reported in the first place.

Maybe part of the problem is that most of us don’t actually have a clear idea of what consent looks like. Every state (and country) has different laws governing sexual assault. It’s such a complex topic, in an attempt to simplify the idea, UK’s Thames Valley Police released an animated short film last year explaining the act of consent through the popular British pass-time of tea drinking.

The video concisely, and somewhat comically, explains the fact that even if someone’s asked for tea, if they become unconscious, you don’t force the tea down their throat; “Unconscious people don’t want tea,” the film’s narrator explains.

According to West’s Encyclopedia of American Law, Second Edition, ‘..in the context of rape, submission due to apprehension or terror is not real consent.’

That’s where it gets tricky for me, and for lots of women who’ve been coerced into sex. How many times have I said “yes” because I was afraid to say no? And how many times did I ignore my own instincts and just submit, hoping it would be over soon, telling myself it wasn’t a big deal? Was that really rape? I’m reluctant to call it that. And when you’re not sure whether you’ve been raped or not, it’s hard to stand up for yourself, much less report a crime, which is perhaps why I never reported my own rape.

Not to mention, there’s a difference between ‘terror’ and ‘apprehension’. Are we never supposed to be nervous about having sex? If I have a drink (or three) to calm my nerves and loosen up on a date, am I preventing myself from being able to give proper consent? If I wake up the next day feeling bad because I had sex with someone when I really didn’t want to, did he rape me?

If the nuances of consent are hard for me to gauge, they must be even harder for men to navigate.

A good rule of thumb is probably not to have sex — any kind of sex — with a woman who says “no” at any point, much like the tea drinking video explains. That might be an “I don’t feel like it tonight, honey,” from a longtime girlfriend, or a clear “no” from someone who’s been flirting with you all night at a party. And don’t have sex with someone who’s drunk, or distraught, or otherwise in a state of mind where her “yes” isn’t crystal clear.

As for women, maybe we need to understand consent better, too.

Maybe we need to understand that we’re allowed to say no. We’re allowed to change our minds at any point — even after going home with someone, even after making out with him, even after we’re naked in bed together. Forget about what you were wearing, or whether you “led him on”. It doesn’t matter. If you didn’t consciously, deliberately, willingly, enthusiastically say “yes”, you didn’t consent. End of story.

Image via twitter.com, video via youtube.com.

Comment: Are you confused about what consent really means?