Being Vulnerable Is The Only Way To Have A Deep, Meaningful Love

About a year ago, someone was spray painting sidewalks all over Brooklyn with the slogan, “Protect Yo Heart.” The first time I saw it was right outside my boyfriend’s apartment; kind of ironic, because in that relationship, I was decidedly not protecting my heart.

No, I’d fallen in love fast and hard, at a time in my life when I was already walking around like a raw nerve, stripped of any hard outer shell I might have ever had. My sister had died just ten days before I met my boyfriend, and only a few months before that, I’d finally managed to end an abusive relationship that had made me fear for my life. I remember whispering to my boyfriend, the first night I spent at his place, “let’s promise not to break each other’s hearts, okay?” He wrapped his arms tighter around me and said, “I don’t think we will.”

I remember studying his face – the best face, I thought, I’d ever seen in my life. I couldn’t get enough of it: his blue eyes, his dimples, his sweetly eager smile. I hadn’t seen him coming. “If this doesn’t work, I give up,” I told myself.

But by the time I saw that graffiti glaring up at me in bright orange block letters, my state of dreamy infatuation had crashed head-on into reality. Now I knew enough to flinch as if I were being personally reprimanded, right there on the sidewalk in front of his apartment. I hadn’t protected my heart, and I was paying the price. 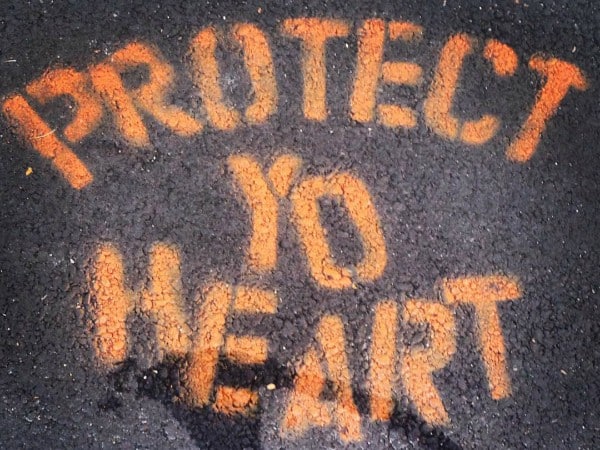 It’s not as if there hadn’t been warning signs. Any one of the red flags in our relationship could have been a deal breaker. He was still married to his ex, he hid things from me, he balked at talk of our future. I was impatient and critical, and I let my temper get the best of me too often. But my gut told me we were meant to be, so I pressed on, ever hopeful. I adored everything about him. I wanted nothing more than to wake up to his face every morning, to hear him sing, to laugh with him, to kiss him every night for the rest of my life. I loved him the way I’d always wanted someone to love me. Without reservation or hesitation. Completely.

And here’s the thing: I still do. Even though things have gotten messy and complicated, and both our hearts have been through the wringer, I don’t have any regrets. In relationships, I believe in being all in. Because being in love – and staying in love – is about making yourself completely vulnerable. It’s about opening yourself up and letting someone in, knowing full well you just might get the shit kicked out of you. It’s about knowing no one is perfect, and forgiving them – and yourself – over and over again. It’s about putting it all on the line because you know what you want, and you’re willing to take a risk to get it.

The author and speaker Brené Brown, who has made a name for herself researching shame and vulnerability, said something that’s stuck with me since I first heard it a few years ago. She’s talking here about the creative process, but it applies to love, too – because what else are we trying to do when we enter into a relationship, except to create something?

“To create is to make something that’s never existed before. There’s nothing more vulnerable than that. When failure isn’t an option, we have a bunch of scared people hanging around, loitering outside the arena. If you go into the arena, you’re going to get your butt kicked. But as scary and dangerous as that sounds, I don’t think it’s as scary and dangerous as spending your entire life on the outside, wondering what if I would have shown up?”

I want big, deep, meaningful love in my life. So I plan to keep on showing up, no matter how many times I get my butt kicked.

Here’s another piece of graffiti that jumped out at me recently, written on the steps in the subway station at Union Square. If you’re looking for a life motto, it’s a pretty good one: 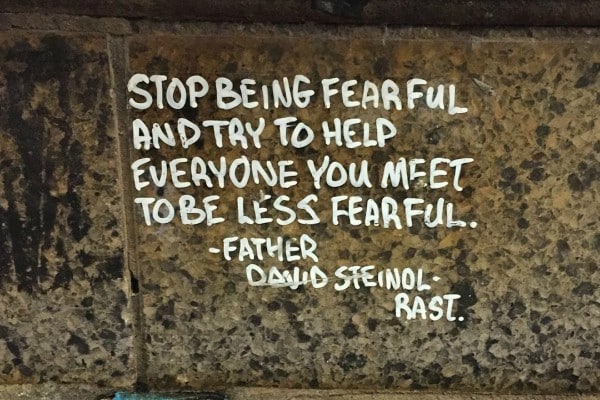 Father David Steindl-Rast is Catholic Benedictine monk who gave an amazing TED talk on gratitude. Gratitude, he says, has the power to change the world. “If you’re grateful, you’re not fearful.”

And so, I choose to be grateful for my bruised heart. I’m grateful that I’ve been able to fall so deeply in love, and stay in love, even when it hurts and it’s hard. I’m grateful that I have the courage to be vulnerable, even if sometimes it feels like opening my heart isn’t courageous at all, but rather the dumbest thing I’ve ever done. As Brené Brown says, “we cultivate love when we allow our most vulnerable and powerful selves to be deeply seen and known.” And I want my life to be full of love.

Comment: In relationships, do you keep your walls up, or do you let yourself be vulnerable?