You might want to sit down for this one…

They say that sitting is the new smoking and it turns out they might be right.

It turns out that sedentary behaviors, such as sitting, can have detrimental impacts on our health if we partake in them for prolonged periods of time. While taking a seat seems harmless, doing it too long too frequently can increase chances of diabetes, obesity and even heart disease (yikes).

I didn’t think about how much of the day I spend sitting in a chair until I well, stood up.

To counteract this epidemic of everying sitting all the time, standing desks becoming more popular in offices across the globe. It’s a trend I’ve been skeptical of for quite some time. To me, standing all day seemed exhausting and unproductive.

So imagine my dismay when my boss told me we were done with sitting for an entire week and would be trialing standing desks. I won’t lie to you, the couch potato inside me died a little at that. but after standing for seven days, I feel like a new woman.

Let me introduce you to our offices new best friend… 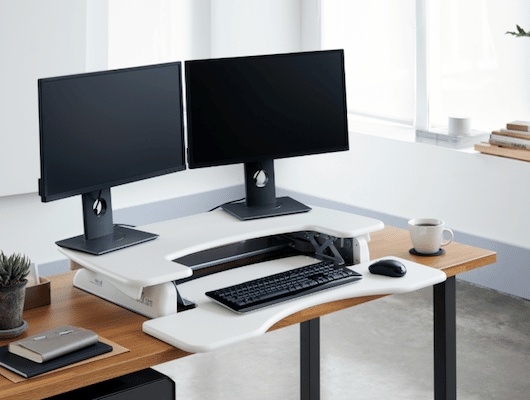 Now she may not look like much but boy did she make us feel good. The geniuses at VARIDESK are the proud parents of some top-notch standing desks and the benefits are undeniable. Not only will it improve the aesthetic of your desk, you’ll feel much better without the cramping and neck pain that comes with sitting all day.

Sound too good to be true? I thought so as well but here are some surprising results of standing at a desk….

It does wonders for the waistline

Standing at a desk burns an extra 50 calories an hour compared to sitting. While that doesn’t seem like much, over the course of a week that adds up to roughly 2000 calories burnt – .nearly the equivalent of one day worth of recommended energy intake for females. It’s all in the little lifestyle differences and it turns out, standing at your desk is actually so much easier than you would think. You don’t have to work out to work off those cheeky Friday arvo margaritas; you just have to stand up.

It reduced the severity of back pain

After spending my nine to five standing, I expected my feet to have flashbacks to my waitressing days where an eight-hour shift felt like an eternity. I was delighted to find they didn’t hurt at all! And neither did the rest of my body.

I’m prone to the dreaded 2 pm neck pain from slouching over a computer all day but by the end of my week on my feet, I found my posture had improved and my pain disappeared. If you’re suffering from any sitting related aches or pains, you’ll definitely reap the benefits of a standing desk.

This was the part that surprised me most of all. I had the most productive week of my life. There’s something about standing up that made me knuckle down and get through my piling inbox. I found myself reaching for my phone less and getting things done faster. I’ll take standing over sitting any day of the week.

It reduces the risk of some diseases

Sedentary habits, especially prolonged sitting can increase chances of diabetes, heart disease, and even lung disease. It stands to reason that cutting out these habits will reduce the risk of these illnesses. If improving productivity, neck strain and general wellbeing aren’t enough to get you on your feet, I don’t know what will!