This Website Helps You Hook Up With Fellow Disney Addicts

If you’re a Disney fan and still haven’t found the one, you shan’t be single for much longer.

Mouse Mingle is a new dating website dedicated exclusively to helping Disney enthusiasts find love. And with a cuter than cute tagline like, ‘Find your Mickey or Minnie,’ who could resist giving it a go?

Regardless of where you weigh in on the debate over whether online dating is better or worse than traditional methods, it’s hard not to label the Disney lovers’ dating haven a success, with thousands of eager singles already signed up. The site’s creator and former Disney employee, David Tavres, has weeded out the diehard fans from any fake accounts by adding a $12.55USD monthly subscription fee.

“I wanted the number to be low enough that people would not be scared – no barrier to entry… but at the same time I want this to be a service that people take seriously and don’t create a bunch of fake profiles,” Tavres said. 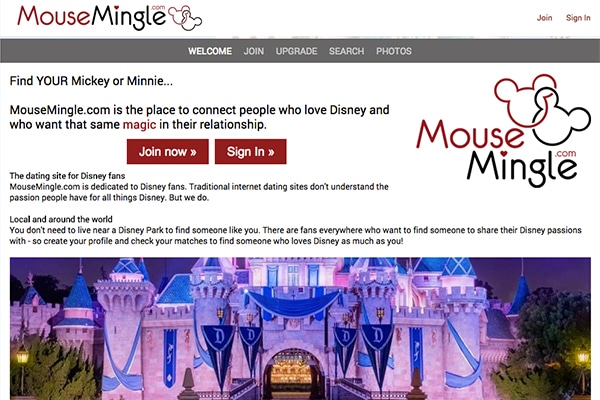 The ex Disney staffer says he created the site to help fans of the franchise connect, since they are “literally all over the world” and often shy about their passion.

“That’s my hope, is that this is not just a theme-park-centric site. This is for the people who live in the middle of nowhere or in the Midwest or [for] people who don’t live near a park in the rest of the world, but they still love Disney or something about Disney and they want to connect with other people who love it too.”

And though its premise is unique, Mouse Mingle is not the first exclusive themed dating website. If you’re Jewish there’s JDate. A farmer? There’s Farmers Only. Go without gluten? There’s a site for that too; Gluten Free Singles.

“Traditional internet dating sites don’t understand the passion people have for all things Disney. But we do,” Mouse Mingle claims on their website.

Singles who sign up can build their profile by answering a series of standard multiple choice questions as well as Disney-focused ones. The questions include: ‘What is your most-loved Disney song?’, ‘Which Disney theme park is closest to your home?’, and ‘What kind of annual pass do you have?’

So if you’re a Cinderella in waiting, a Jasmine in search of her Aladdin, or a sexually frustrated Mickey Mouse fan, you may have just found your perfect match.