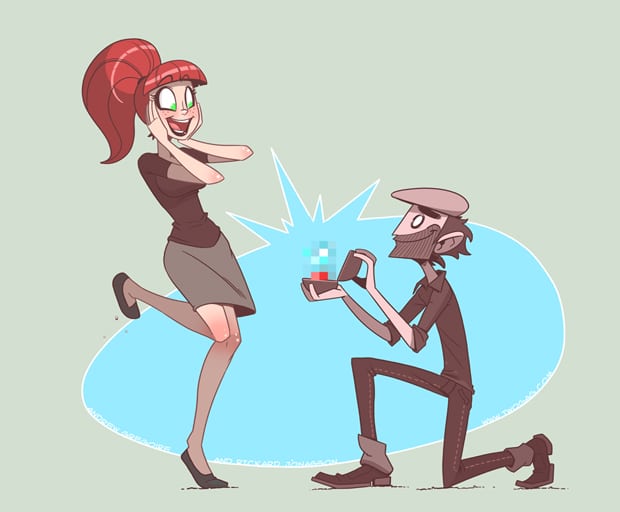 We all get that proposing marriage can be a nerve wrecking experience but the drunken proposal is just plain wrong. I’ve actually had this happen to me more than once! So, chances are that if one woman has experienced this multiple times it must be a bit of a trend. I maybe wrong, but it is a possibility. It might also be that I just totally lucked out and probably not in a good way either.

Now, the first time I received a drunken proposal, I fell for it. I was young, dumb and in love. It didn’t matter how he proposed just as long as he did. It seemed everyone around us was in proposal mode, so I figured sooner or later it would be my turn. Sure enough it was, at the worst time possible! I happened to be so drunk when receiving the proposal, that when I woke up I had to ask whether or not it actually happened. Had I dreamed it? Was it real? And, more importantly, did I accept?

Hungover and desperate for answers I discovered that apparently I had. Hmmm, not exactly the way I’d pictured it. Perhaps this is the reason I switched from alcohol to coffee? I do recall not getting that drunk for a very, very long time!

Anyways, I might be a bit old-fashioned here but there are still plenty of ladies out there that believe one day the man or woman (I won’t discriminate, even though laws do) of their dreams will actually show up. To add to this fantasy, they’ll eventually get down on one knee and ask the question, “will you marry me?” In her mind it will be perfect.

They will probably be somewhere romantic, candles, soft music and the love of her life down on one knee, holding hands, asking earnestly if she’d give them the honor of becoming the wife. (It’s actually quite difficult writing this gender neutral, but you get the gist.) We’ve seen it on The Bachelor, heard it it fair tales like Cinderella, so surely that’s how it’s supposed to go?

So, image the horror when this image is replaced by the reality of a drunken proposal? There’s no romance, or very little and they’re probably down on two knees because they’re far too wasted to balance on one. The words spill out of their mouth so slurred that they are almost unrecognizable and the speech they had prepared goes totally out the window. Basically they’re that drunk that the words flow out like, “willyamaryme” as if it’s one word rather than a phrase.

Unfortunately it isn’t pretty but I can understand that it’s easily done. The individual is so nervous preparing and looking for the right time to propose that they choose to have a few drinks to calm their nerves. Those few drinks turns into a few too many and voilà! Thankfully by the second drunken proposal I’d learned my lesson and demanded the romance, which is perhaps why I’m still waiting for it?

It’s not all bad though. There is something worse than the drunken proposal. I’ve seen it happen to others and those poor souls accepted and then had their proposal revoked. Ouch! Having awoken the next morning the proposer took another look at their bride to be and thought, hell no! What have I done? Suffice to say not exactly relationships made in heaven. So, I’m certainly not going to complain. At least I haven’t had to endure that!