It was easily the most bizarre thing I’ve ever done in the name of natural mental health remedies. But I’d do it all over again.

I was a grown-ass adult when I first realised not everyone suffered from anxiety.

Up til I turned 28, I’d thought the constant overthinking, incessant internal monologue and that awful heart-racing adrenaline-flooding feeling were things everyone put up with.

And once my shrink told me I was an anxious person and needed to find ways to self soothe, it took another few years to find out what worked for me. But sometimes, even having my bedtime routine, soothing bath with calming essential oils, light meditation and white noise couldn’t shut off the brain noise. Which is goddamn annoying when you’re trying to sleep.

Anxiety saw me staring at the ceiling, battling restless leg syndrome, and compulsively scrolling through Facebook night after night. And then I saw it… a little sponsored post advertising the Neptune Blanket, a weighted blanket for people with anxiety.

My first reaction was, “Excuse me but how the hell does Facebook know I have anxiety? Did I somehow list it on my profile in a delirious, sleep deprived state? Is my phone spying on me?!” Once I had thoroughly checked my privacy settings (and checked to make sure there were no hidden cameras anywhere in my room) I clicked on the link. A blanket that could help me feel calmer? SHUT UP AND TAKE MY MONEY.

Then the rational Liz kicked in. “Put your damn wallet away,” I thought. “Let’s think about this for a minute. Loads of things claim to cure anxiety, so maybe you should do some research on the science and psychology behind this.”

The science behind weighted blankets 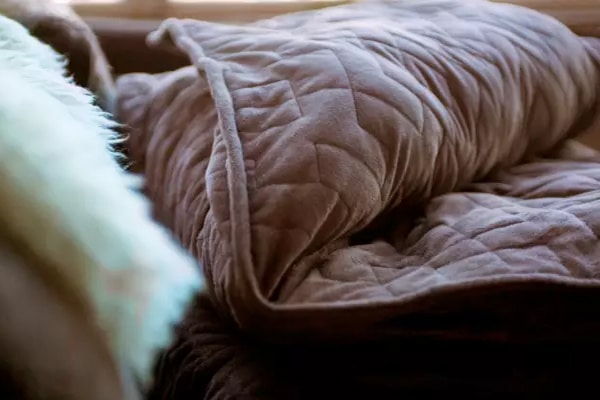 My begrudging research told me that weighted blankets had once been a tool of psychiatrists and therapists for people with sensory disorders, to help them focus on sensory experiences. Experts have said weighted blankets may help boost people’s ability to regulate their own emotions and behaviour. Since then, they’ve gone mainstream and are advertised as relaxation aids, and anxiety-busting tools that can help with everything from Obsessive Compulsive Disorder and anxiety to insomnia.

But enough with the marketing guff, what’s the science behind it? It’s all about the benefits deep-pressure touch. The touch of a weighted blanket is said to stimulate the release of serotonin and dopamine, both of which make you chill the hell out and relax. On top of that, research suggests this kind of touch can stimulate the limbic system, which is the brain’s computer for processing all your emotional stuff.

Which is all well and good for people with full-on sensory processing disorders but there isn’t as much research around whether these blankets help the masses with general anxiety issues and relaxation.

Welp. I would have to put my wallet on the line and take one for the team to find out if it really worked. Because science.

… Certainly not just because the Neptune Blanket looked super cute and luxe, and I just wanted one.

Time to sleep my anxiety away 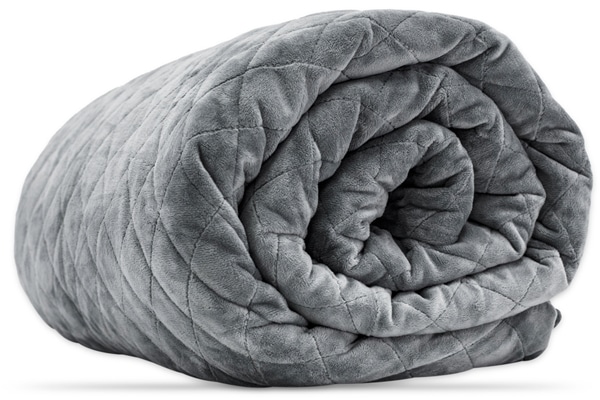 According to the site, it was important to choose a blanket that was 10 per cent of your body weight, so I chose the correct one for me, handed over my credit card details, and waited with baited breath.

When it arrived a week later, via a hunky delivery man I may or may not have taken a second glance at as he was effortlessly hoisting it up over his head, I pulled it out of the box excitedly. Was my anxiety cure just a weighty sleep away…?

The blanket had a diamond quilted pattern, and a super-plush minky cover. It. Was. Luxe. Inside the cover, were heavy glass beads, evenly sewn into little squares to avoid them moving about. The cover was removable, which was great because that meant it could be used in summer and winter.

First impressions were good. Then I tried to drag the blanket into my room. Yes drag, because friends, I have zero upper body strength and that thing was heavy. I heaved it up on my bed, huffing and puffing as I straightened it out.

“Holy shit,” I thought. “Making my bed is practically my strength training for the day now.”

The first night I laid under the weight of my Neptune Blanket, not going to lie, I started to panic a teensy bit. It felt heavier than I expected on my chest and I had visions of myself not being able to breathe in the middle of the night. Was this going to be the most expensive blanket-related mistake I had ever made?

But then I remembered I had anxiety and was hardwired to overthink things (duh), and really tried to be mindful about how the blanket felt. It was heavy, yes, but also it was strangely comforting. Like I was getting a hug from my bedding. And the best part was that I could still stick a foot outside the bed if I wanted to (hello temperature regulation!). I didn’t feel constricted, but rather, somehow safer and more secure. It was definitely a soothing feeling (when I wasn’t worried about being crushed to death in my sleep by a blanket and a million other equally unlikely things).

I settled in for (hopefully) a full night’s sleep.

The next morning I woke up and my first thought was, “It’s the next morning! I slept through the night!” My second thought was, “Um, my body is kind of … sore.” And since I hadn’t exercised the day before I had to assume the weight of the blanket had caused the dull muscular aches I experienced. It turned out tossing and turning had turned into a full body workout overnight. Which as much as it kind of ached now, could only be a good thing right?

I got a bit nervous… If I was going to feel this way after every sleep with my weighted blanket, I wasn’t sure I could keep going. Because far out, it felt like I’d had a day at the gym.

Turns out I am a massive wuss with no muscles anywhere, because it only took another night or two under the little glass beaded wonder for me to get used to the weight of it.

So, can a weighted blanket help anxiety? 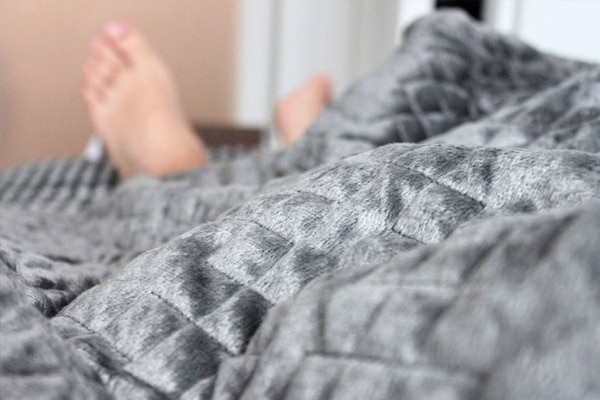 Scientifically I couldn’t say, but anecdotally? I am totally onboard.

Since I got my blanket I have definitely slept better, and there’s been less tossing and turning. There’s a feeling of comfort and security that comes over me each time I use it. On warmer nights I can take off the cover and not use my duvet so I don’t overheat.

It still hasn’t shut off the brain noise, which I didn’t really expect it to. But the restless legs are gone, and I feel like I’m getting a hug every night and I find it hard to sleep without that extra snuggle weight now.

Not to mention my upper body strength is improving just through pulling up the covers in the morning.

Join the discussion: What products or treatments have you tried for your anxiety?