Why Absolutely Fabulous: The Movie Is All You Need For The Best Girls Night Ever

Grab the vodka and the cigarettes, Eddy and Patsy are back.

If there was one show that defined the 90s, it was arguably Absolutely Fabulous.

A BBC sitcom that followed the darkly hilarious foible-riddled lifestyle of functional alcoholics, Edina and Patsy, and Edina’s perpetually embarrassed 20-something daughter, Saffron; the show provided more than comic relief, it held a mirror up to the struggles of being a woman in a society obsessed with constantly being young and hip.

Now, the movie version of the show, which features a non-stop line-up of some of our fave Ab Fab one-liners and slapstick moments and plenty of new ones, is out on DVD, offering the perfect combo of LOLs and good feels for a true girls night in.

In the movie, veteran publicist Edina, facing potential career failure, gets word from Patsy that supermodel Kate Moss is on the hunt for a new PR and decides to make it her mission to get Moss to sign on the dotted line.

Things take a turn for the worse when, at a party attended by the supermodel which the women have hustled their way into, Eddy accidentally drunkenly pushes Kate Moss into the River Thames. The result sees Eddy facing jail time, but more horrifyingly, the prospect of being, “fat and old and hated and nothing.”

We won’t ruin it for you, but the ending has a truly spectacular twist you won’t see coming that really puts the icing on the cake after 20 years of hedonistic living, binge drinking and acerbic comic stand-offs.

The only way to enjoy this absolutely fabulous flick, is with your girlfriends. Cigarettes and vodka optional.

Team SHESAID enjoyed the new Ab Fab flick at our girls’ night in thanks to The Adina Apartment Hotel, Sydney. You can grab your own copy of Absolutely Fabulous: The Movie on i-Tunes now. It’s perfect for a Friday night with bubbles, sweetie darling. 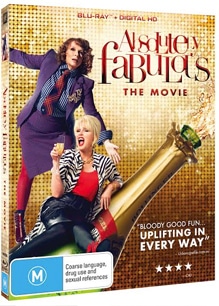