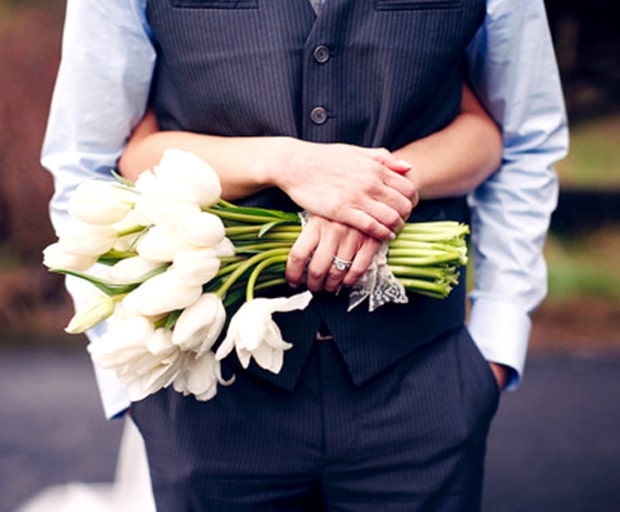 Let’s All Calm Down: There’s Nothing Wrong With A Guy Trying To Pick You Up

In his special, comedian Aziz Ansari wonders what it would be like to propose to a woman if there was no such thing as the institution of marriage. He asks his pretend ladylove if he can “keep hanging out with you until one of us dies,” and if she’ll wear a ring “so that people know we have an arrangement.” When the wary bride asks, “Why are we doing this?” Aziz answers, “Tax purposes.”

As a college-educated 27 year-old city dweller, I’ve officially entered the high-frequency marriage decade — I was invited to seven weddings in the past six months alone. And I can’t help but wonder, does it all boil down to tax purposes? Why do we get married?

Despite what Beyonce says about “if ya want it then you better put a ring on it,” the data points to a different reality. Young adults today are getting what they want— cohabitating, having children, and buying houses —before marriage at higher rates than ever before. And for the millennial generation that came of age with a 50 per cent divorce rate as the norm, a significant minority (25 per cent) say they aren’t sure they want marriage at all.

Yet demographers still predict that nearly 80 per cent of us will marry. Why bother?

Certainly the rights and legal protections that come with marriage are nothing to scoff at, and the freedom to opt into this institution should absolutely be granted to those who have been discriminated against and systemically excluded. In fact, tax and health care benefits (among many other rights) for lawfully married couples can be a huge driver.

But these aren’t exactly the reasons that come to mind when I think of committing to spending my life with someone, for richer or for poorer, in sickness and in health.

Andrew Cherlin asserts in The New York Times that marriage has taken a new role in our society as “a status symbol — a highly regarded marker of a successful personal life,” which now comes as the final signal of adulthood instead of the first.

It’s as though marriage has become the modern mid-life crisis buy: a beautiful, expensive purchase to point to as proof of our success and vitality.

And an expensive purchase it is — last year the average price tag for a ceremony and reception came in over $28,000. As a result, more young adults without a college degree are postponing marriage (but moving ahead with cohabitation and child-bearing) than those who can afford the wedding they want. It’s as though we feel less pressure to get married at all, but if we do choose to tie the knot, more pressure to have an elaborate ceremony.

In a nation where the wedding-industrial complex is omnipresent on television, we’ve built up high expectations for our big day — helped along the way by the $51 billion wedding industry.

Marriages are unequivocally great for business — even when they fail. It’s not just the wedding planners and cake decorators, think of the hit that home goods stores with wedding registries, honeymoon resorts, and yes, marriage therapists and divorce lawyers would take without this sacred institution.

All this leaves me feeling disillusioned. Perhaps that’s why I’m starting to count myself amongst the 25 per cent of my peers who agree with Aziz: marriage is an insane proposal.

I recently expressed these feelings to the man in my life (whom I love madly) like this:

“I get the same feeling about marriage as I did when I learned Santa Claus isn’t real. Like it’s something I’ve been taught to believe in, and want to believe in, but maybe believing in it is kind of useless.”

In other words, a trust in “the institution” won’t dictate whether or not we choose to spend our lives together — married or not.

Even with the rights and legal protections that come with marriage, it can’t be counted on to eliminate uncertainty, guarantee everlasting love, or prevent betrayal. And I absolutely don’t want marriage to be some token I rely on for assurance that I’m all grown up and leading a successful life.

If I ever do choose to marry, I hope to have the privilege of doing so not because of tax purposes or for health care coverage, or for any of the false promises above.

Like entering any legally binding contract, making an informed, personal decision free from external pressure is the only way it’s valid in my book. Any presence of coercion renders the whole thing null.

In this way, I’m pro-choice on marriage: whether or not two people decide it’s the right step for them doesn’t reflect the validity of their love.

This article originally appeared on Role Reboot as Why Believing In Marriage Is Like Believing In Santa Clause and was republished here with full permission.

Comment: Do you agree that marriage is kind of pointless?