I safely co-slept with both my babies and it strengthened our bond.

I’m not what you’d call a risk taker when it comes to my precious kids.

Having struggled with multiple miscarriages and infertility, it took me so long to get them that I was never going to be anything other than an over-protective parent.

I hover. A lot. I’m ridiculously fearful of either of them being injured or hurt. In fact, I’m such a helicopter parent that, with apologies to any future spouses, I’ll probably be breaking into my kids houses of a night when they’re 34 just to make sure they’re safely tucked up in bed.

So it’s a surprise to many people that I flouted conventional wisdom on the safety of co-sleeping and still frequently share a bed with my children (don’t worry, I will stop that well before they’re 34). So why would over-precautious me take what so many people consider to be an irresponsible Sudden Unexplained Infant Death Syndrome (SIDS) risk? Because, right or wrong, co-sleeping worked for our family.

Before anyone starts flinging themselves about in fits of ill-advised parent shaming or finger pointing, I believe every mother has the right to decide what they works for them, whether it’s controlled crying or co-sleeping, because too little sleep leaves a new parent exhausted to the point of creating risks. Let me also clarify that my definition of co-sleeping does not mean bed-sharing (though we also do that now they’re a little older) it means having a child sleep within a sensory distance of his or her parent. And like everything involving our precious kids, we minimised risks.

My infant son was not what one would call a great sleeper. And by not great, I mean he so delighted in maternal tête-a-têtes during the wee dark hours that one could be forgiven for thinking I was raising a vampire. He was definitely not one of the alleged 60 per cent of children who sleep through the night by three months of age, or indeed ever. And functioning on the 27 minutes of sleep he allotted me per night became almost impossible.

My sleep wasn’t just broken, it was dead and buried, and night after night my baby was dancing merrily upon its grave. Something had to give. So we called in the experts. They told us to move my son’s cot out of our room and into his own so he could learn to self soothe, which in essence meant cry himself to sleep. But I couldn’t let him cry. 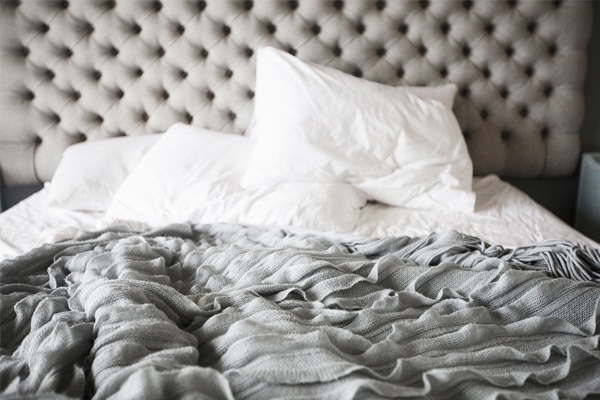 Once I read clinical research that showed that sleep trained babies are just as stressed when they wake in the night as the ones who aren’t, and they’ve just learned there is no point expressing it, I knew it wasn’t an option for us. The thought of him sitting quiet, alone and distressed felt wrong. Instead, I found myself getting up to attend to his needs an extra eleventy billion times a night, only in a different room.

Our next step was to visit a sleep clinic but when a rather stern sleep expert insisted that my baby needed to “learn his place” I was straight out the sleep training door. Because as she snarled her clinical cliché, my parental instincts kicked in and I knew that as far as I was concerned, my baby’s place was with me, whenever and why ever he needed me.

Given I’d never been a great sleeper myself, who was I to judge him for wanting to get up and party with me 17 times a night? In fact instead of fighting it, I decided if he felt the need to party all night, I’d bring the chips and dips! Sleep would come eventually.

We moved his cot back into our room, only closer, something infant sleep safety experts recommend for the first six to 12 months of a baby’s life to lower the risk of SIDS. And something the unqualified experts who’ve built an enormous industry around delivering advice to sleep deprived parents generally fail to mention. The renewed closeness to me appeared to offer my son a level of comfort that saw him almost immediately cut back his partying to once or twice a night.

While we didn’t bed-share in those early days, and it undoubtedly does come with risks, I was surprised to discover it is the norm in the majority of non-Western societies. I was even more intrigued to discover there is also a statistically lower incidence of SIDS in these countries. That’s probably because, while families share a sleep surface, it’s generally a firm one and they rarely rock the thick blankets or fluffy pillows that we take for granted.

Instead of just listening to anecdotal bleatings of the latest trendy sleep expert, we began looking into a number of actual studies and the statistics collected from them. So when our second child came along, we decided to safely co-sleep from day one.

For those who like to suggest that we’re spoiling our kids and discouraging their independence, I say bullshit. It’s a child’s biological imperative to stay with their mother. That’s how they were designed. And despite my now school-age kids still regularly bunking in with us, they are two of the most self-reliant, adventurous and confident little souls I’ve ever met. Why? Because they feel secure, which encourages them to explore and take risks. You know, the ones I hate so much.

These days the only people at risk of any injury are their dad and I, as the kids have a tendency to steal all the covers, leaving us at risk of frostbite. But it’s one risk I’m prepared to take, as sharing a bed has strengthened our familial bonds and means I get enough sleep to be a better parent when the sun shines.

Comment: What’s your stance on co-sleeping? Did you co-sleep with any of your babies?