Why I Victim-Blame My Mother

Why doesn’t she just leave him?

I have a pretty rocky history. I don’t like to admit it too often – I want to be more than my past ­– but it is a really important thing to understand when I try to explain why I victim-blame my mother for staying in an abusive relationship.

My mother isn’t perfect. She’s made a lot of mistakes and they still affect me to this day, like being verbally abusive to my sister and I. She was always verbally abusive to her boyfriends through the years as well. As I’ve grown up, I recognize how she treated us was never okay, but she did it because she was so profoundly unhappy, and dealing with a lot of issues from her own childhood. Now, our relationship is pretty good. Except for Bill*.

Seven years ago, my mother met Bill* and everything changed. I saw her become genuinely happy for the first time in my life. She never said another negative word about my sister or I, and started to smile all the time. They got engaged pretty quickly, and why shouldn’t they have? She was so happy.

It was a massive shock the first time he hit her. They were drunk, arguing, tempers rising, and he pushed her into a wall and onto the ground. He stood over her and screamed in her face. I think she was in shock, doubting it was Bill* in front of her because this person was not the man she had known and fallen in love with.

It escalated quickly from there. The police were called several times, statements were taken, but no charges ever laid. I would stand in horror as she spoke to the police at our front door, saying “it’s only when he drinks”, “I probably pushed him to do it”, and “this isn’t the real him”. It hurt me to see the happiness she’d found transform around her into something so ugly and violent. It also confused me to see my mother – who had always been so tough – turn into a damaged, timid and scared person. It didn’t make sense to me. 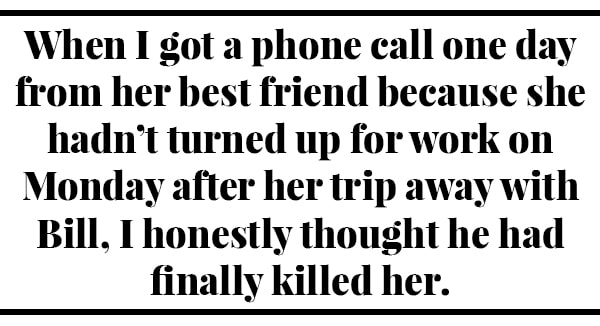 I began willing her to leave him, reminding myself not to get angry with her for going back. I knew the stats – on average, it takes someone seven tries to leave an abusive relationship before leaving for good. I knew removing family support could make it harder for her, and that it could ultimately be more dangerous for her to leave than to stay. All I could do was be there for her, and beg her to press charges this time.

But she never did, and she has tried to leave him more than the average seven times. It never sticks.

It didn’t stick after they went camping and she had to run for her life while he chased her down in a car, breaking her ribs and leaving her covered in blood. And it didn’t hold after she made the gruelling decision to press charges. Not even after I’d sat with her as she made a two-hour long statement at the police station, stripped, while having photos taken of her battered body.

Watching my mother go through this changed my opinion about her situation. I couldn’t be understanding anymore when she decided to stay with him for the umpteenth time. I couldn’t slap on a supportive smile when they went camping together again, and she willingly put herself back in a situation where they had no phone reception, no people around, and no escape. So when I got a phone call one day from her best friend because she hadn’t turned up for work on Monday after her trip away with Bill, I honestly thought he had finally killed her.

Thankfully it wasn’t to be that time. She turned out to be safe, but so long as she stays with Bill, she’ll never be truly safe. She knows he’ll do it again. She believes he might actually kill her one day. But she still loves him. She once told me “I finally found the man I want to spend the rest of my life with, and he turns out to be a monster. But I won’t ever find anyone else”. How could she stay with him after he broke her ribs? How could she stay with him after turning men away for much less? Why doesn’t she just leave him?

I constantly replay these victim-blaming questions over in my head. I’m ashamed to admit it, because as someone who escaped a toxic relationship myself, I am strongly against blaming victims for violence. But when it comes to my mother, I just can’t help myself.

I’ve seen this man beat her. I’ve seen her in the hospital. I’ve heard her crying at night. I hate him, I blame him, and I know all of the responsibility falls on him. But I want my mother to leave so badly, I find myself getting frustrated with her. She always told my sister and I if a man ever physically abused us, to call the police and get out of the relationship. Yet, she brings Bill to family events, has him living in her house, and speaks to me like I haven’t seen him try to kill her.

So I bottle up my victim-blaming monologue and deal with it, because I don’t want her to feel isolated. I know that’s the worst thing I could do for her right now. A 2013 study in the Journal of Marriage and Family found women were most likely to leave an abusive relationship when they had the most social support and financial resources. So I support her, but I put guidelines in place. Bill isn’t allowed to touch her, or speak to her in a way I don’t like if they’re in my home. If I tell him to leave, he has to go, or I will call the police. I explained to her I have to draw the line somewhere, but she knows I really drew the line the first time I saw her in the police station, naked, bruised and crying – still making excuses for his actions.

I’m deeply ashamed of the fact I victim-blame my mother for not walking out on Bill.  I couldn’t stand it when I found out people thought these things about my own abusive relationship. It made me feel deeply betrayed.

Even though I love her so much, I can’t help but think my mother knows better. My logical brain has been taken over with emotion, and every time it happens again, I get more and more frustrated and hurt. I hope she knows it’s out of love, and not anger that a part of me resents her for staying. I just hate seeing my mother living as a shadow of the woman she once was.

*Name has been changed. Images via giphy.com.