Why Is The LGBT Community So Alcohol Obsessed?

I’m just going to say it: our community has a drinking problem.

No one thinks twice about booze-filled college parties or hitting up bars and clubs in the evening in your early twenties. It’s a part of the culture, one of those rites of passage you’re supposed to go through.

So even though I’m not much of a drinker myself, I didn’t think it was unusual when most of the young LGBT people I knew hung out primarily in these spaces. Social events focused around the queer community were almost always booze-soaked – an evening at a drag bar, or a party where beer and wine were sold. Even at events where we were informed repeatedly that we were expected to behave responsibly, alcohol was still a part of the picture.

Now that I’m older, I struggle to find places within my community that aren’t alcohol-dominated. When I’ve had office jobs with LGBT groups, within them our mixers were almost always ‘wine events’, and when I’ve wanted to celebrate during Pride Week, every event in Los Angeles seems to be plastered with Budweiser and Tanqueray advertisements. Hell, the only venues that exist reliably and exclusively for queer people in major cities across the country are bars and clubs – alcohol venues.

So why is our community alcohol obsessed? 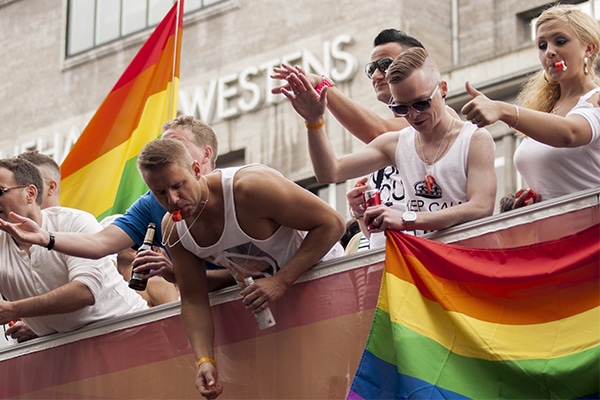 It seems like it is to me. Sure, you can find queer spaces that aren’t booze-soaked, maybe there’s a community in your city that’s a queer book club, or people under your particular umbrella of queer always meet up for coffee on Monday evenings… But these are few and far between, and they can be difficult to locate unless you happen to know someone either in or tangential to those groups.

Let me be clear, consuming alcohol isn’t inherently bad. I’m not one of those moralistic anti-alcohol people who think the devil’s juice is going to corrupt you. I’m just personally not a fan, probably in part because alcoholism destroyed my relationship with my ex-girlfriend. But as the constant designated driver for every LGBT-related event I’ve been to in the last 15 years, I have to wonder if we aren’t just pandering to our own stereotype.

Most people who aren’t connected to our community think of alcohol-laden scantily clad boys dancing on a float during a local pride parade when they think of us. They think of party kids; young people with studded bracelets, candy necklaces and rainbow-painted hair, smoking outside of a club on a Saturday night. And certainly they think this in part because it’s more fun for the media to report on this ‘party child’ image of our community than it is to show photos of us quietly holding hands in the park – but part of that onus is on us too.

Where are my queer coffee bars? Where are my social clubs that don’t rely on bars for their after-hours meeting spots? Why is it that our community seems to require booze to survive?

I think it’s because we don’t want to let go of that image of ourselves in our early twenties. We want to be forever the party kids, we want to escape the gruesome facts of many of our realities. We don’t want to think about the discrimination. We don’t want to think about how our boss can legally fire us if we come out at work, or how we still aren’t granted the same treatment many heterosexual couples take for granted. We want to wear glitter like it’s our shield, and we may need a little liquid courage to pad it.

And there’s nothing wrong with needing that every once in a while. But at some point, we need to get ourselves together. We need to decide that we’re not going to get trashed on Saturday so we can march on Sunday – so we can walk into work on Monday with our heads held high. We need to stop leaning on booze and a party façade and figure out who we really want to be.

Comment: Do you think the LGBT community has an alcohol problem?