Woman Loses Ovary After Being Branded A Complainer

“Every nurse’s shrug seemed to say, “Women cry, what can you do?”.”

A Brooklyn woman has lost an ovary after being made to wait 14 hours at a local medical centre before receiving appropriate treatment. Rachel Fassler was rushed to the emergency room accompanied by her husband Joe with excruciating abdominal pain. When questioned about the scale of the pain, which she was asked to rank from one to ten, Fassler described it as an ‘eleven’, only to be dismissed by nurses as being melodramatic.

Fassler’s husband told The Atlantic his wife was, “nearly crucified with pain” and “writhing so uncontrollably that the nurse couldn’t get her [blood pressure] reading”. However, regardless of the fact Fassler’s case was clearly a dire emergency, the husband and wife were shifted to the back of the line and told to wait their turn.

Policy states that patients in the emergency room are to be immediately assessed and treated according to urgency, as defined by their symptoms and level of pain. The majority of hospitals use the Emergency Severity Index to do so; a five-level system that rates patients on a scale from ‘resuscitate’ (treat immediately) to ‘non-urgent’ (treat within two to 24 hours).

While Fassler’s blatant agony indicated a clear emergency, her husband recalls other patients in the line at the emergency room that day were either sleeping, or chatting quietly with family and friends.

“I started to realize — in a kind of panic — that there was no system of triage in effect. The other patients in the line slept peacefully, or stared up at the ceiling, bored, or chatted with their loved ones. It seemed that arrival order, not symptom severity, would determine when we’d be seen.”

Despite his wife’s clear distress, Fassler’s pain was still not taken seriously, with nurses repeatedly assuring the couple her case was not an emergency, going as far as telling the distressed patient, “You’re just feeling a little pain, honey.”

A couple of hours after their arrival, the couple were finally seen by an attending physician. However the visit was so brief the Fasslers didn’t register he was responsible for overseeing their care.

“She [Rachel] hardly noticed when the attending physician came and visited her bed; I almost missed him, too,” Fassler’s husband stated.

“He never touched her body. He asked a few quick questions, and then left.”

The diagnosis by the physician was that Fassler had kidney stones. She was prescribed the standard treatment; hydromorphone for the pain, followed by a CT scan. However, she was not given the scan until 3pm, over seven hours after her arrival.

After yet another long wait and many more hours of excruciating pain which the sedatives barely took the edge off, the couple received a shocking diagnosis. The results revealed rather than kidney stones, Fassler had been suffering from ovarian torsion; an ovarian cyst that’s grown to the point of twisting the fallopian tube, cutting off blood flow to the ovary, and can ultimately be life-threatening if left untreated. Finally, the hospital sprung into action, removing Fassler’s now massively swollen ovary to the couple’s relief.

However, in an appalling revelation, the husband and wife were informed the reason Fassler was diagnosed with kidney stones in the first place was because the attending physician did not bother to do a physical examination, which could have easily picked up an ovary as swollen as Fassler’s.

“Later, doctors told us that Rachel’s swollen ovary was likely palpable through the surface of her skin. But this particular ER, like many in the United States, had no attending OB-GYN. And every nurse’s shrug seemed to say, “Women cry, what can you do?”.” 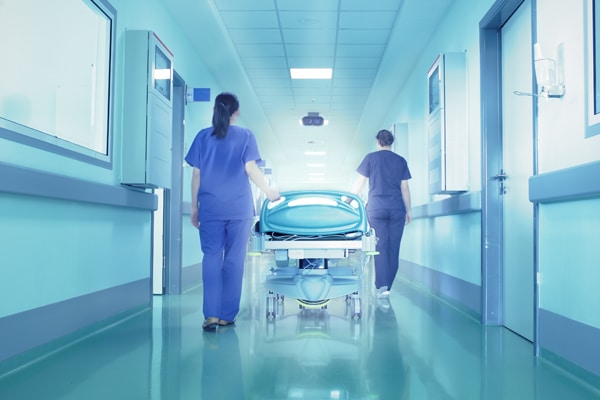 Unfortunately, the Fasslers’ story is not rare. Female pain is regularly not taken as seriously as male pain in the medical system. The physician’s lack of concern and misdiagnosis was the first step in denying not only the severeity of his female patient’s condition, but the specifically female nature of it. This attitude is affirmed by the fact most hospitals in the US don’t have an attending obstetrician or gynecologist available to female patients. As such, women are often left at the mercy of an over-clogged system; their health issues lumped in with every other generic physical condition.

In the US  hospital system, the average male patient waits 49 minutes before receiving an analgesic for acute abdominal pain, while women typically wait 65 minutes for the same thing.

Female anguish is often mislabeled as hysteria; equated to the alleged ‘fuss’ (dubbed as such by males) women make over period pain. Any woman who has had a particularly bad month or suffered the debilitating pain of endometriosis will tell you this is a legitimate fuss to make.

The condescending attitude to the pain women feel is explored by Diane E. Hoffman and Anita J. Tarzian, who conducted a study on female pain; The Girl Who Cried Pain: A Bias Against Women in the Treatment of Pain, in 2001. The study found women are ‘more likely to be treated less aggressively in their initial encounters with the health-care system until they ‘prove that they are as sick as male patients’. This is referred to in the medical community as ‘Yentl Syndrome.’

This lack of understanding indicates the unwillingness of not only men, but women who have not experienced ovarian issues, to educate themselves about the very unique and specific nature of female health issues, perpetuating the idea that any kind of pain or passion displayed is synonymous with emotionality, and should therefore be dismissed as irrational.

In order to combat this, we must make an effort to reject the idea that as women we’re wholly influenced by our hormones, and open our minds to the fact that we are rational, thinking beings whose pain, frustration, and rage are not always a byproduct of PMS.