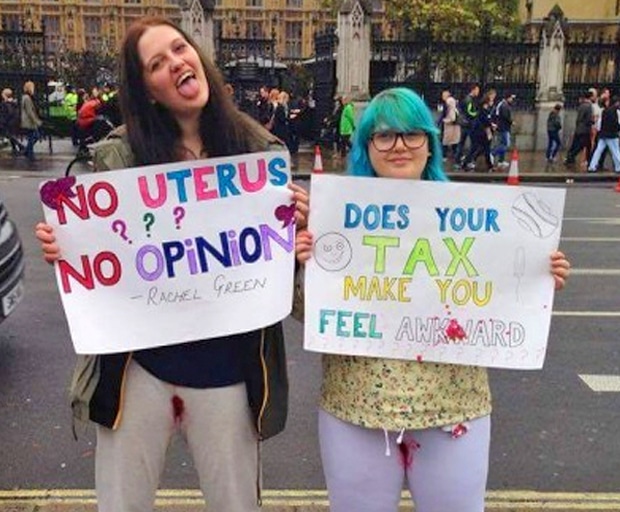 If the inset image makes you feel uncomfortable, you just got the point.

Twenty-two year-old Charlie Edge and her friends took to the steps of British parliament house this week to prove just how unluxurious and uncomfortable menstruating can be by going tampon-less and opting to bleed freely and visibly through their tights.

“[Periods] make you feel consistently uncomfortable for a week. And if you aren’t lucky enough to be 100 per cent regular, they can surprise you at the worst of times and you end up looking like me, but not as part of a protest, but in the middle of a restaurant or class or supermarket.  They are gross. And tampons and pads are a necessity. As you can see from my post, most people really don’t like seeing period blood. So they SHOULD NOT be classified as a luxury item.”

The protest is in retaliation to a recent vote by the British government against removing a 5 per cent Value Added Tax (VAT) from menstrual sanitary items, which is currently enforced in several other counties around the world including Australia, France and certain states in the US. 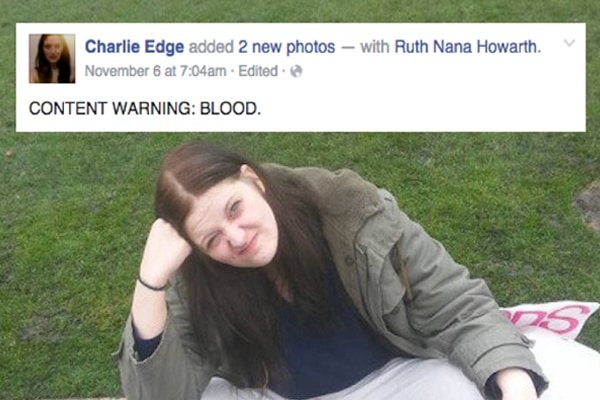 “They’re not luxury items, anymore than jaffa cakes, edible cake decorations, exotic meats or any other number of things currently not taxed as luxury items,” she wrote. Maternity pads are taxed, but incontinence pads arent. We’ve had enough,” continued Edge.

Edge and co aren’t the first to poke holes in the lunacy of taxing pads and tampons as ‘non-essential luxury items’, a group of women recently took to social media to protest the tax in hilarious style with a collection of musical parodies and staged photos, with captions like: ‘Long day at work today. Think I’ll treat myself with a bath, a Milk Tray and a luxury tampon. #tampontax’

Let’s face it, periods aren’t fun. Anyone who’s gone through the emotional rollercoaster of having one and endured the excruciating cramps that often come along for the ride, isn’t going to tell you they’re a luxury. So why are governments around the world still calling them one? Isn’t this whole debate really just arother way of male dominated governments trying to police women’s bodies?

Perhaps even more poignant to this argument are the millions of women worldwide who are forced to choose food over tampons because they simply can’t afford both. Rather than taxing sanitary items, shouldn’t we be looking at reducing the cost of them altogether? Periods are an expensive and uncomfortable enough affair. Let’s not add insult to injury.

Comment: What are your thoughts on the tampon tax?