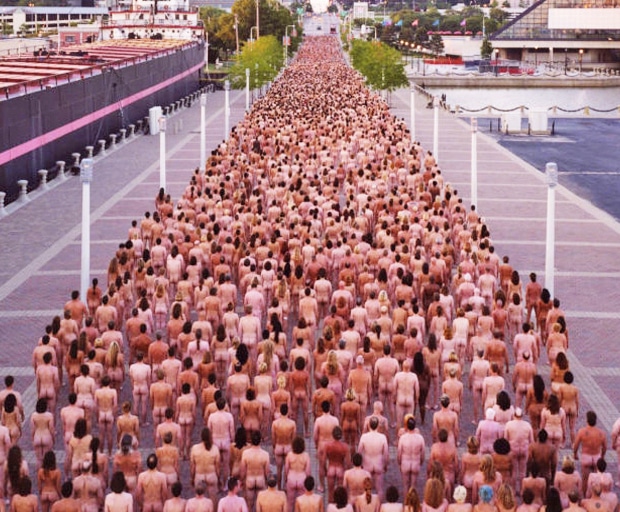 To The Model Who Took This Photo: You Are A Body-Shaming Bully

“We have daughters and we want them to grow up in a society where they have equal rights.”

Artist Spencer Tunic is well known for his powerful photographic works showcasing women’s naked bodies in all their glory, but Tunic’s latest work, which took place on the eve of the Republican National Convention, made a statement that went much further than celebrating the female form.

After over 1,800 women from around the world responded to the artist’s callout for his new work in May, Tunic released the secret location for the photoshoot via email to just 200 hopefuls this Friday, hoping 100 would show up.

At 6:20am on Sunday morning, women of every age, ethnicity, shape and size filed into an empty lot on the Cuyahoga River in the Quicken Loans Arena in downtown Cleveland, cloaked in sheets and holding large round mirrors in preparation for the shoot. Half an hour later, Tunic faced the anxious crowd to announce the purpose of his new work.

“The Republican party has given an excuse to hate. We have daughters and we want them to grow up in a society where they have equal rights for women. The sun is coming up. Now, when I say three, let’s get naked!” the artist declared.

A few seconds later, the crowd dropped their sheets and thrust the mirrors above their heads to reflect the morning sunlight streaming over the vacant lot, creating a stunning visual in the once dull, desolate lot. But beyond the aesthetic masterpiece was a profound political message; one the artwork’s female participants discussed enthusiastically with one another after the final shots were snapped just a stone’s throw away from the arena where controversial Republican frontrunner Donald Trump is set to be formally named as a presidential candidate this Thursday. 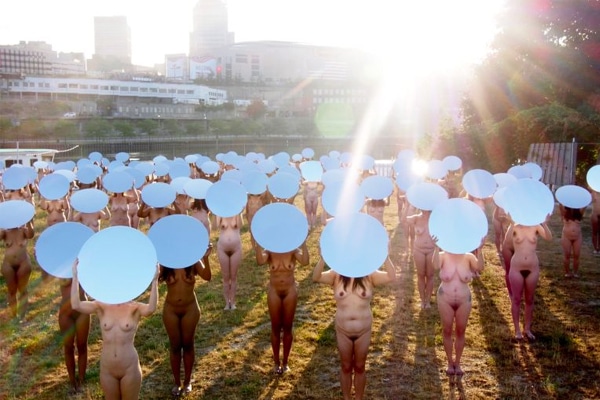 “I’m here because I’m a trans woman and we’re not supposed to like our bodies, and I don’t like that. It’s going to be great! I’m very antsy; it’s like Christmas morning.”

The art installation project, titled Everything She Says Means Everything, which attracted women from as far as Belgium, is aimed at highlighting ‘the knowledge and wisdom of progressive women’, according to the artist’s website.

“There shouldn’t be a rhetoric of hate in a presidential election,” the 49 year-old photographer told AFP last month, alluding to the many racially and gender charged statements Trump has made in reference to women in the lead-up to the election.

“I can’t just vote. I have to do something… I think every artist in the United States should make an artwork before the election and get it out there.”

Comment: What’s your reaction to this artwork, and to Donald Trump’s views on women in general?