Women’s Lives Don’t Matter: Why Oscar Pistorius Got Away With Killing His Girlfriend

Murder is murder – it should be as simple as that.

By now, most of the world has heard about the announcement made in the sentencing of Oscar Pistorius, an Olympic athlete turned murderer.

A South African judge gave him just six years for killing his girlfriend Reeva Steenkamp, and it was six years the judge didn’t think he’d earned. The same judge tried to give him a slap-on-the-wrist manslaughter conviction, and thankfully that was so offensively favoritest that a higher court reversed the verdict and made the judge try again.

So the question on the table is this: did Pistorius mean to kill his girlfriend or not?

The judge didn’t think so, hence the light sentencing, and the defense claimed he thought it was an intruder. The prosecution insisted the man had a violent streak and that the two had argued, leading to the fatal shooting. The higher court that dismissed his manslaughter conviction said it didn’t matter: no matter who was behind the door, Pistorius should have known firing his gun would result in a murder.

What I find the most interesting about this debate is that there is no question he killed someone. Oscar Pistorius took a woman’s life. He murdered someone who was not an immediate danger to himself, even if he assumed an intruder was behind the door. 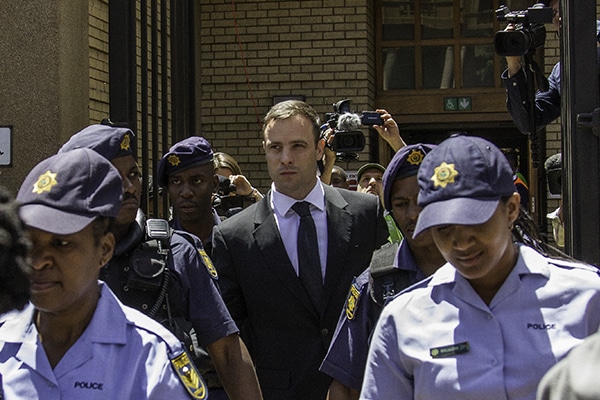 Assuming he’s telling the truth and he thought someone had broken into his home, it says a lot about him that his first thought was to murder them. I can’t tell you the number of times my roommate has come around the corner and scared the daylights out of me, or my cat’s knocked over a glass in the kitchen and forced the same reaction. Let’s hope Pistorius doesn’t have any pets!

Another fact not being debated is that the sentencing judge, Masipia, showed clear favoritism. He specifically cited mitigating circumstances for his low sentence, stating that Pistorius seemed genuinely remorseful for his actions and describing him as a “fallen hero”. But Pistorius’ judge’s treatment of his case isn’t rare.

Just weeks ago, former Stanford star swimmer Brock Turner was given a slap on the wrist after raping an unconscious woman behind a dumpster after a party on campus. His judge expressed concern a harsh sentence would impact his future too greatly.

In May, an Oklahoma court ruled against convicting a 17-year-old who forced a semi-unconscious woman to perform oral sex on him, due to the fact intoxication and unconsciousness are not mentioned in the state’s forcible sodomy law.

And in February, three Australian men who gang-raped a 17-year-old girl in Croatia last year walked away with a $30,000 token fine for their crime.

Even powerful female celebrity Ke$ha was refused the right to have a contract severed, which led to her being forced to continue to work with the man who had repeatedly abused her since she was a teenager.

As was proven in these cases – a mere handful among thousands of similar ones – Pistorius’ paltry six-year conviction ultimately reinforces the message we’ve been repeatedly getting with disturbing frequency: the cost of a woman’s life will be tempered by the damage it could do to their murderers’ – or rapists’ – reputations. Getting justice for these women weighs less on the scales of justice than do the futures of these bright white warriors, and as such they deserve opportunities they neglected to provide their victims.

We often joke about people getting away with murder, but in a world that glorifies being a man, particularly a white one with money, the list of things you can get away with apparently really does include rape and murder.

Beyond even what it says about how little we value women, Pistorius’ sentence proves how little we value lives in general. If you murder your wife, that’s alright so long as you play football. Rape little kids? No problem, we’ll cover that up for years – just keep being a fantastic coach, or priest, or businessman.

Listen: it doesn’t matter how fast you can run, how many powerful connections you have or steps you’ve progressed up the career ladder – murder is murder. You aren’t entitled to special treatment because of who you were in the past when who you are in the present is someone who believes taking a life is an acceptable solution to your problems.

But that sure is a hard point of view to sell when we’re actively teaching the men of the world the exact opposite.

Comment: If you were given the chance, what would you change about the way society operates?