Woody Gets Hard At Work In The Bachelor Season 3 Premiere

Ah, another season of The Bachelor Australia: isn’t it the best?! Is this how die-hard sport fans feel at the start of a new season?

I frigging love this show. I can’t get enough of the blood sport that is watching 19 young women willingly cut themselves off from the outside world, then be shut away into a hellish, hormone-laden prison – sorry, a lush mansion – where their every move is caught on camera and they must compete for the affections of one man.

And the man in question? Sam Wood: a Bachelor-worthy himbo who’s displayed all the emotional intelligence of a pot plant thus far, and who has the requisite reality dating TV show’s muscle-bound torso and seemingly one-dimensional character.

However, never fear, ladies – this season three Bachelor does come armed with special gifts: no.1 he’s not a real estate agent and/or stripper aka last season’s most hated man in Australia Blake Garvey (phew) and he does in fact work with children (cue house of horrors inhabitants’ collective, in-sync ovulation); he has a lush head of hair styled in an appalling Ray Martin-esque hair helmet only rivalled by that of The Bachelor Australia host Osher Günsberg’s luxuriant locks; and can we all just take a minute to praise Network Ten here for giving us a bachelor named Sam Wood? What an awesome name for our bachie?! There are endless “wood” puns to be had with his name and so let’s call him “Woody” here, henceforth, for short. 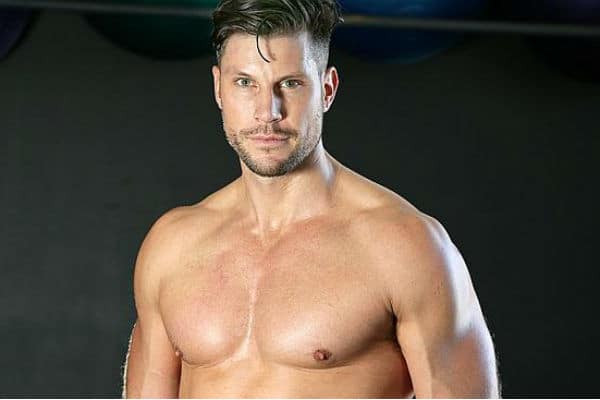 If you were unfortunate enough to miss the scintillating, titillating and ground-breaking TV that was The Bachelor Australia episodes one and two last week, I’m going to recap some highlights for you here.

Cue many of them declaring Woody is the most fabulous walking hairpiece, sorry man, they’ve ever met approximately five seconds after meeting him, and excited squeals aplenty about his alleged tall, dark and handsome good looks and much estrogen-fuelled talk of early “connections”. Yawn. Deprive 19 attention-starved women of company with the opposite sex and you could probably present a monkey in a tuxedo and some of them would still declare he was a great catch.

Early frontrunners for Woody’s wood include the very gorgeous Snezana, who he seems enamoured with, but unfortunately may as well go home now because not only can Woody not pronounce her name, he is entirely aghast over the fact she is a mother and has dared to procreate outside of his harem; the very pretty and allegedly “career-driven” events manager Sarah who impressed our Bachelor with her ability to do the “downward dog” and “warrior one” basic yoga poses while dressed in a glorious tight, white evening frock; and the “hectically cool” hipster-dudess and possible Woody favourite Heather (pictured), who tries really hard to be nonchalant about the fact she’s joined the freak-fest that is The Bachelor, complete with constantly calling Woody “dude.” 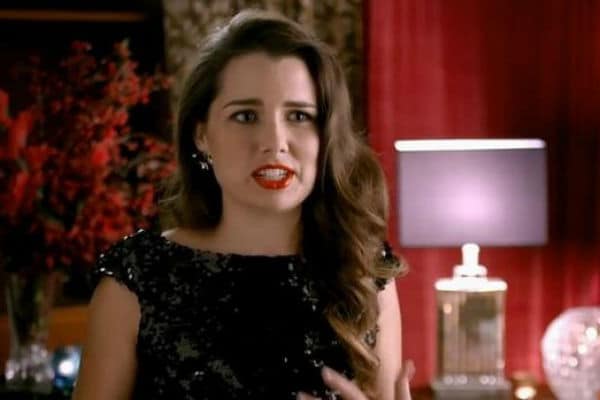 If my children were anywhere near this chick in real life, I’d seriously call the cops, because she is on a strange and tortured inner-trip, let me tell you! After picking a fight with poor, old confused Reshael, who somehow maintained dignity in the face of a Lord of the Flies-esque house brawl, Sandra then quickly makes enemies with every other contestant on the show by being her bizarre, outlandish, extroverted and deranged self. Has she spent too long with minors and forgotten how to act with maturity and self-respect? Well played, Network Ten producers, well played. Like last season’s resident crazy, Amber, Sandra is actually inevitably due to stick around until the bitter end just so she can cause a multitude of tears, tantrums and dramas in the mansion of misery.

Finally, after a lot of alcoholic beverages and extreme side-eye action, Sarah (pictured) gets an early red rose, Heather gets the early “wild card” white rose first, which gives her the “amazing power” (cue sarcasm font) to ask Woody out on a date, and the entire season three harem is herded for a rose ceremony. At this point, I started to like Woody a tad more after he sends an intense, plastic-fantastic Barbie lookalike called Zilda who “really, really wants kids” home, along with Jessica, whom I can’t recall doing anything of note. Of course, Anal Glands remains, so Woody is either into that shit, literally, or he’s blocked the horror of it all.

Episode two then gets hurriedly underway when Sarah wins the “pleasure” of being Woody’s first one-on-one date, while the other contestants busily set about crafting voodoo dolls in her likeness while watching she and Sam sail away aboard a giant yacht. Sars has, guffaw, unfortunately chosen to wear the world’s tiniest belt, sorry skirt, on her date and so spends most of the date looking genuinely terrified, whether this is due to her deep-seated fear of boating, the wild seas, her straightened hair getting messy and/or her flashing her vagina on national TV, I can’t be sure.

Of course, Woody takes this opportunity to grunt a lot and speak in monosyllables, press his body close to hers, display a total lack of empathy and emotional intelligence by saying Sarah is “loving it” and impress upon his poor, frightened date his extreme love of boating, which probably means he owns a tinnie in real life.

Back to the mansion of misery, where the remaining contestants are then forced to compete for Woody’s attentions and endure some sort of movie-themed group date horror with Woman’s Day, whose editor looks like she wants to stab herself, with this season’s best pursed-lips cat’s bum expression thus far.

And things are now getting far from “hectically cool” for hipster-dudess and Bachelor frontrunner Heather, whose cute description on what it would be like to meet the love of her life in Ep1 is now coming back to haunt her big time as she seemingly finally realises she is trapped in the midst of a TV dating reality show where she has to endure watching hordes of other women making out with Woody. “The horror! The horror!” she seemed to be thinking, all ingénue wide eyes.

And Heather is far from alone on this naiveté: her main rival, the delectable and uppity Laurina-wannabe (see season 2) Emily Simms (pictured) was, quite rightly, a tad peeved at being asked to strip down to her undies, with half her tiny, toned arse hanging out on national TV, for a bizarre Ghost-themed, pottery-wheel nudity grab. And next up, Jacinda loses the plot, causing all cameras to collectively turn to point at her to document her meltdown, with her practically in the foetal position, crumbling under the pressure of being a pawn in the Playboy Mansion-esque showdown. 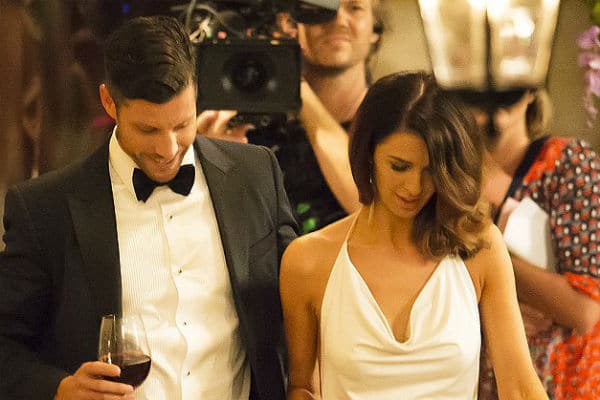 I want to scream at these girls: “Wake up and smell the roses (which most of you won’t get), ladies! You’ve signed your lives away to a TV network for the country’s sick, voyeuristic pleasure! None of what you’re doing, or being asked to do, is in any way normal!?”

I mean, imagine in life you’re, say, lucky enough to meet one or two or even three soul mates, and then you have to fight for their love alongside a score of other women, all documented on camera?! Who the hell signs up for this thing? And who wouldn’t go a bit mental themselves under these brutal and mind-f***ing conditions, while locked away in a mansion of misery? I actually feel more than a little sympathy for these young twits for putting themselves in such an unwinnable situation. Are they all sadomasochists? It’s humiliation galore – and don’t we TV watchers love it!

Osher and Woody are all sombre hair helmets at the episode two rose ceremony where poor, hapless Reshael is sent home, along with a faceless, blonde girl whom no one can recall speaking called Krystal and a lumberjack named Tessa, who distinguished herself by, yawn, being too cool for school by changing from her cocktail frock into casual gear, all in a wild, desperate bid to get Woody’s attention. Apparently, she didn’t er, fire up Woody’s engine. And yet, Anal Glands and mad, bad teacher Sandra (pictured) still remain. Why are they both still here?! Is he too scared to talk to them again? 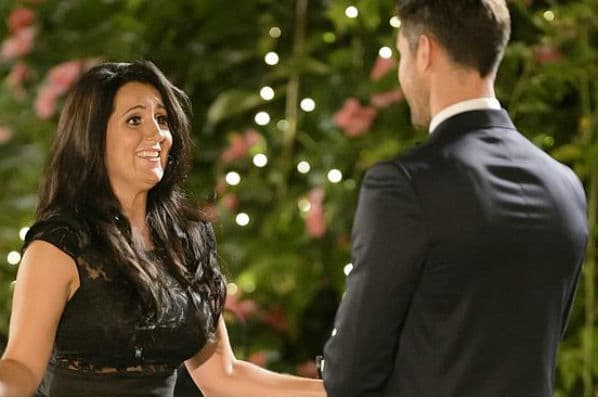 So, dear readers, some lingering, unanswered questions going into The Bachelor Australia episode three this Wednesday night: do any of the women, in fact, still have real jobs? Why are they on the world’s worst dating experiment? Who are the blatant star f***ers chasing their 15 minutes of fame? And what is the “epic scandal” Network Ten is promoting the hell out of prior to this episode’s airing? Did someone forget to do their brazilian wax? Eat a sandwich? Not pack 20,000 bikinis?! Stay tuned for yet more humiliation galore…