A funny thing often happens once you exit the corporate world to have kids – it’s like your currency, as a once-prized female worker, suddenly goes into rapid decline. Of course, well before that, you often become an awful inconvenience to your employer once you – gasp – have the selfishness and audacity to even fall pregnant to begin with. Sacre bleu!

RELATED: The Reality Of Further Education For Mums

For your extreme tiredness, morning sickness, aches and pains and sheer strain of growing a small human may prevent you from being the once unflappable and productive worker you once were, now no longer more an happy to stay back and work long hours of overtime for free.

And, once you then take time off for family obligations, including maternity leave, this often has long-term negative effects on a woman’s career – like lower pay or being passed over for promotions in the future.

However, employers should think long and hard about their often covert (and highly illegal) discrimination towards working mums, for a new study shows women with children are actually more productive than their childless peers.

A recent US study from the Federal Reserve Bank of St. Louis discovered that over the course of a 30-year career, mothers outperformed childless women at almost every stage of their careers. In fact, mothers with at least two kids were the most productive of all.

This news will come as no surprise to working women who often have to juggle demanding kids and a needy husband, work commitments, exercise, housework and friends and family’s needs and expectations – all at once.

It’s a tightrope – a constant juggling act – and, as any working mum brave and honest enough will tell you – it’s often impossibly hard and occasionally, at least one area of your life will be suffering. 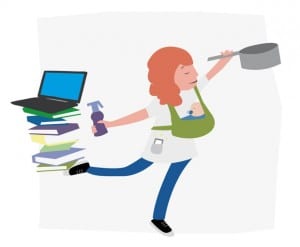 The researchers (all men) behind this particular study strived to understand the impact of having children on highly skilled women. Key findings include: within the first five or so years of their career, women who never have children substantially underperform those who do and women with at least two children performed the best.

Of course, it’s not all sunshine and roses: wrangling small people can inevitably adversely affect your productivity.

Christian Zimmerman, one of the study’s authors said: “While you have small children, it has an impact on you. But after that, it seems that the impact is the other way.”

Working women must – as a matter of sheer survival – become super-organised, tenacious and tough. And while I abhor the supermum myth, I do think multiple kids makes you more competent at work.

Got a deadline, but need to be home and/or done in time for your toddler’s birthday party? Just watch that working mum go at it – faster than the speed of light. 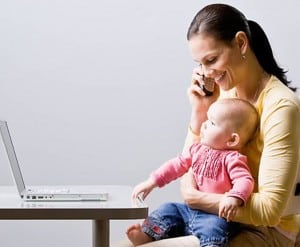 What do you think? Are working mothers more productive?