“Can you pay me back for the coffee? I don’t like wasting my money.”

Just when you thought dating via social media couldn’t get any worse, Tinder produces this beauty.

London blogger Lauren Crouch recently posted a thrilling tale of Tinder tastelessness after which, she was asked to refund her date the $5 (£3.50) he spent taking her out to coffee.

The ‘gentleman’ in question suggested meeting Crouch at a train station.

“I figured it’d be a usual thing of finding a good pub and having a chat over a few drinks,” Crouch wrote of the experience.

Everything seemed to be going swimmingly, until he suggested they instead get coffee at a chain shop on his side of the street because it, “Saves crossing.” Alarm bells, anyone?

After about half an hour, Crouch’s date announced he had to depart because (of all things) he was expecting a grocery delivery. Regardless, Crouch remained the optimist, and didn’t assume anything unusual was at play.

“He was very intelligent and was well-spoken and carried himself well…We were having good, mature conversation.”

However, things began to head south pretty quickly when the man asked Crouch if she wanted to go back to his place so he could make her dinner. Keeping her wits about her, Crouch told him coolly, “I couldn’t possibly go back to the home of someone I’ve literally just met, sorry.” Sensible decision.

After this everything seemed fine. The guy relented, they said their goodbyes, and he eventually messaged her later asking if she wanted to go out again. Having had some time to think it through, Crouch had decided she wasn’t in the mood for a second go at it.

“Sorry for the delay! Was lovely to meet you but I’m not sure if we had that chemistry,” Crouch texted back. “Hope you had a good evening, take care.”

But Crouch’s date continued to insist she come back to his place for dinner, so again, she politely turned him down, explaining, “Unfortunately I’m a big believer in feeling some kind of spark early on. Wish you all the best though.”

Things should have ended there, but instead her Tinder date responded demanding a refund for the coffee he purchased on their date… 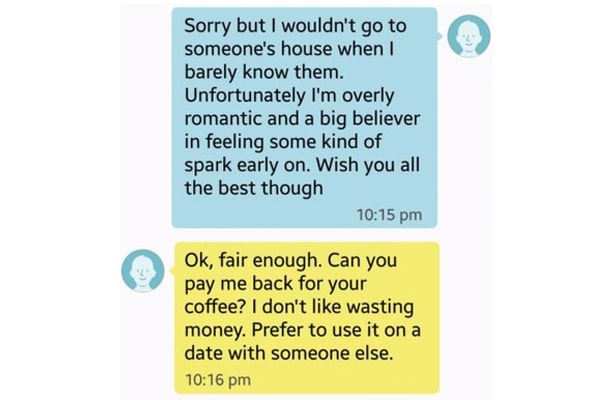 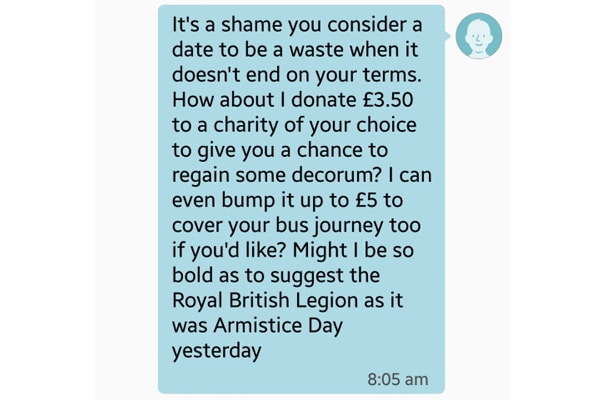 Clearly, Crouch has some serious gumption. Any guy with half a brain would have admitted defeat. However, this douchebag had other plans.

“I’d like to decide for myself what to do with my money,” was his curt reply.

Unsurprisingly, the story went viral as soon as Crouch blogged it. Spread under the hashtag #OcadoandChill (Ocado being the name of the grocery store he was waiting on a delivery from), people took to Twitter to share their disbelief and outrage. 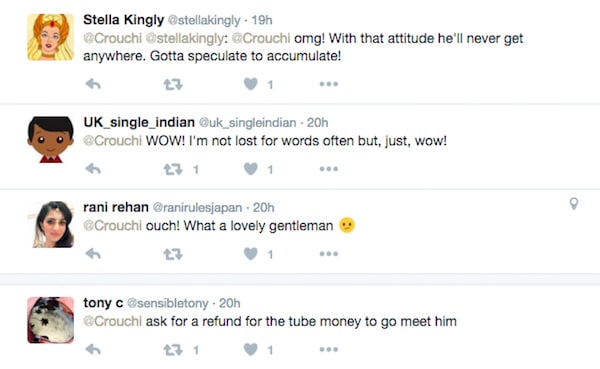 Some even reported similar experiences, speculating that it was, in fact, the same guy asking women to refund their dates if they refused to have sex with him. The fact this has happened more than once makes me weep for the fate of humanity.

Here’s the thing. Thanks to the ever-looming threat of human beings evolving to the point of exiting the womb with a smart phone grafted to their hands, dating has become less, well, formal. You can date ten people at the same time if you want and nobody will be any the wiser (unless they have mutual friends on Facebook). You don’t have to communicate face to face, which means that not only is everyone dispensable; rudeness has become excruciatingly easy to get away with.

This curious incident of downright ridiculousness reflects the sad fact that we are fast losing respect for each other. Why? Because there are no ramifications when you’re hidden behind a touch screen. The only solution I can suggest is to think on what we were taught our first day of school; treat others as you would like to be treated. Come on, is that really so hard to live by?

Images via nobaddatesjustgoodstories.tumblr.com and twitter.com