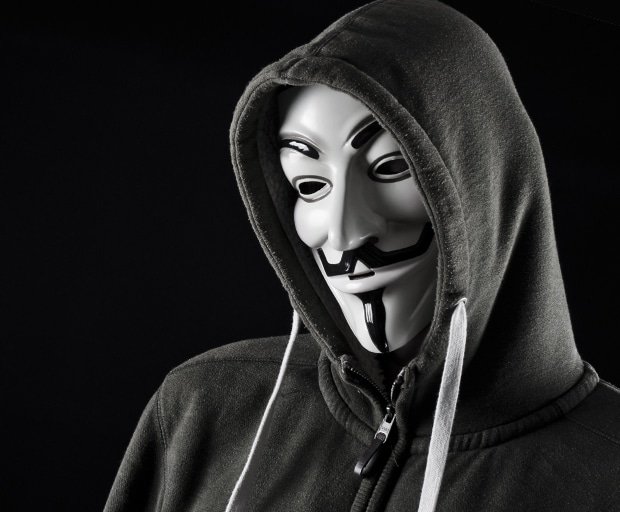 “I’m good at stealing, and I need money.”

If you think you know all there is to know about the internet, you probably haven’t heard of the ‘Deep Web’ (DW), the uncatalogued and slightly harder-to-access part of the world wide web.

How big is it? Well, the DW is estimated to be 5,000 times the size of the surface web. In other words, there is no way you’ll ever see all of it. Mind. Blown.

Not that you’d want to see all of it, anyway. The DW is a very obscure and mostly illegal place, accessible through special browsers that conceal your identity. You’ll find all kinds of dubious services on there, such as fixed sports betting and even hitmen hire.

Sadly, but not surprisingly, the biggest part of the DW is child pornography, making up an estimated 80 per cent of it. Even just researching this story I had to be very careful with what I clicked, as there are things that can’t be unseen, lurking around every corner. Then there’s the black market, selling pretty much anything you can imagine – from drugs and guns to fake identities and even human organs.

Okay, so we’ve figured out the black market is full of illegal goods, but what about more trivial things, like a designer handbag or a new phone – stuff you really want but simply can’t afford? Well, a reasonable person would save money for it or forget about it, but if these two options don’t satisfy you, you can actually pay someone to steal it for you on the DW.

A guy known as Dangler runs a website hidden inside the elusive world of the DW, called Buttery Bootlegging. On the homepage, he explains his business in very simple terms:

“You want something expensive, but don’t have enough money. I’m good at stealing, and I need money.”

Fair enough. Basically, all you have to do is send Dangler an email telling him what you want and how much you are willing to pay. After he steals the item, he will send you a picture of it next to a piece of paper with the word ‘Dangler’. You then transfer Bitcoin money to him (a digital currency used to pay anonymously) and he’ll post the item to an address of your choice.

It’s a simple concept with seemingly little risk, yet it is wrong on so many levels. People who use Dangler’s services are probably doing it for one reason: they believe financing somebody else to steal for them is not as bad as committing the crime themselves.

I admit it can seem like a gray area. The definition of the word ‘stealing’ is to ‘take (another person’s property) without permission or legal right and without intending to return it’. Therefore, paying someone else to steal could be considered by some as simply paying for a service while keeping a clean conscience. 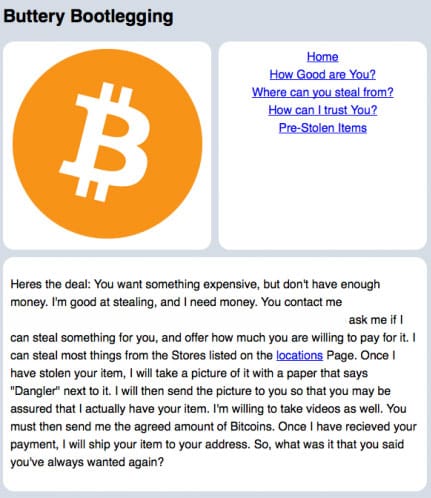 From a moral perspective though, I find it hard to believe Dangler’s customers can live without their guilty conscience keeping them awake at night. Besides the fact that it is never okay to steal, putting someone else in danger of getting caught because you don’t have enough courage to do it yourself is cowardly and despicable.

Moreover, remember that the items Dangler steals are mainly luxury items from big department stores – they are completely unnecessary. So is it really worth the risk? It must be for Dangler, who seems to get a kick out of stating on his website that he sometimes steals for no reason. But as the person financing the theft, wouldn’t you feel guilty every time you use the item that was stolen for you?

Admittedly, Buttery Bootlegging is one of the more harmless services offered on the Deep Web. The most well-known black market, Silk Road, selling illegal drugs and weapons, was shut down by the FBI in October 2013. Ever since, many replacement sites have emerged, some of which make more than half a million in revenue every day.

The truth is, the DW is part of a huge money-making industry. At a time when all web traffic is monitored, it attracts millions of people concerned about their privacy. And with a feeling of anonymity comes a feeling of invincibility, explaining why so many people are happy to be involved in illegal activities once they enter the realms of the DW.

Comment: Do you think paying someone to steal for you is wrong?