Year Of The Booty: Kim K’s One Redeeming Talent?

If 2014 is the Year of The Booty, do we women – gasp – actually have porn-star-turned-Vogue-covergirl Kim Kardashian to thank? Kim K, 33, she of arguably the world’s most photographed derriere, certainly has a luscious, round booty to be proud of, no argument there.

Related: Fitness Tips: 3 Exercises To Tone And Shape Your Butt

But it hurts my brain to credit her with anything for Kim Kardashian West – as she’s now known after recently getting hitched to the seemingly equally vacuous Kanye West – actually first shot to fame after a 2003 sex tape with her then-boyfriend Ray J was leaked in 2007.

Whether it be fate; good, dumb luck or by design – that same year Kimmy and her family were commissioned to star in the reality TV series Keeping Up with the Kardashians. The show’s runaway success paved the way for spin-offs including Kourtney and Kim Take New York and Kourtney and Kim Take Miami.

And in 2010, Kim’s porn-star debut paid off big, when the LA native was named the highest-paid reality TV star, with estimated earnings of $6 million. Of course, aside from her huge talent for um, well… Kim hit the headlines for all the wrong reasons again in August 2011 with arguably the world’s dodgiest sham marriage to professional basketballer Kris Humphries.

Despite a disgustingly opulent and widely publicised wedding, the hapless pair split after Kim embarrassingly filed for a divorce a mere 72 days later.

Now, call me unfair, but I don’t hold Kimmy up to be much of a role model. She’s certainly not the kind of woman I want my daughters to admire or emulate. I choked on my cornflakes, like many others, when she and Kanye actually secured the cover of US Vogue‘s April 2014 issue (pictured).

“How did Kim Kardashian become so famous, Mummy?” Awkward. 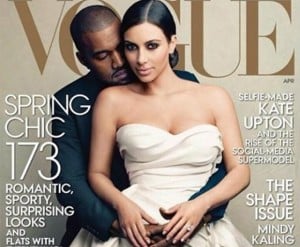 And aside from her good looks (and aforementioned awesome arse), the US TV personality and socialite seems like a puppet on a string, achieving ridiculous success again, goddamit, with several clothing collections and fragrances, thanks to her wheeling and dealing matriarch/manager, Kris Jenner.
And sure, Kim and Kanye’s daughter North West is adorable – that too, is an achievement.

But I’m wondering if Kim K’s one true vocation in life – her higher calling – was to make women the world over feel proud of their booties.
Like other bootilicious stars who’ve basked in her budunkaa-dunk-dunk glory, ranging from Beyonce through to J-Lo and Nicki Minaj, Kim K has really brought booty back. 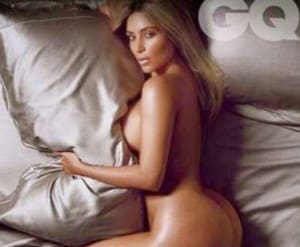 Now a major fitness/fashion trend, big booties are big business. And I don’t know about you, but growing up, my hourglass curves weren’t something I immediately embraced.

It took me years to learn to love my curves – my bum included – and dress for my shape. And there were many times back then, and even now, when I look in the mirror and wish my bum didn’t stick out quite so much. Well, Kim K stand proud – baby got back, and you’ve arguably helped women more than you’ll ever know.

I was recently amazed and chuffed to see major fitness websites promoting “tips and tricks on how to get a bigger booty”. Plus, there’s a whole industry surrounding bum injections and butt implants.

What a new bizarre, crazy, bootilicious-loving world. Thanks Kimmy.

Main image via pcbmao.blogspot.com; US Vogue shot via www.entertainmentwise.com and GQ shoot image via ohridsky.com