You Have The Right To Remain Fat

My body used to belong to me.

When I was a little girl, my favorite part of the day was when we got home from errands or preschool. I would push the front door open with both small hands and run—through the living room filled with plastic-wrapped furniture, past the washer dryer that made funny sounds that I liked, past my bedroom filled with a growing collection of Winnie the Pooh toys—into the bathroom. I would take all my clothes off as quickly as possible, shimmying out of my underwear and pants, breaking out of my shirt like it was an inconvenient membrane. I would leave the pile on the floor and then run back out, giggling with uncontained delight, to the kitchen where my grandmother was always cooking.

I would stop at the end of the little hall, where the calico-cat-colored rug met the linoleum of the dining room. I would spread out my arms and legs as far as I could. And I would jiggle. My thighs and belly, my cheeks and my whole body would wobble. I would turn my head in circles. I liked that everything moved and undulated. My body was like the water in the bathtub or the water at the community pool, which I loved so much in the summer. My body was like that water, a source of relief and fun, a place I could jump into and be held. It felt good. Oh, it felt so good. I remember how curious I was, and how much I loved that my body could do these incredible things. I had no sense of self-awareness, only the immediacy of pleasure.

I think back on that time in my life as if it was someone else’s story. It feels so far away. I feel protective of that little girl, who couldn’t imagine the horrible education awaiting her.

Less than a year later, those jiggle-filled afternoons would disappear. I would find myself being taught by boys at school that I was unlovable and disgusting because of my fat body. I would lose sight of how magical my body was, how magical I was. I would lose the sense that my body was mine at all.

All the freedom and wonder I felt became supplanted by a sharp sense that I had failed at something big. And that it was my job to fix it—to fix me. Rather than learning to trust my instincts and value myself, I learned that the size of my body was the only thing that mattered about me.

Through a series of violent, culturally sanctioned events—so commonplace that women simply call them “life”—my innate relationship to my body was taken from me and replaced with something foreign and alien and harmful. My relationship to my body was replaced with one toxic idea: your body is wrong. This idea would threaten my happiness and my health for nearly two decades.

As much as I wish it were, my story is not unique. It is, in many ways, the story of women’s lives in America.

As I was writing the introduction to this book, I got an email from a woman who told me that she was being treated for bulimia, an eating disorder that disproportionately affects women and only exists in cultures that glorify thinness. Even though she was seeking treatment for a disorder that threatened her very life, she was still cautioned against gaining “too much” weight while in recovery. Her email reminded me of the first time I’d heard such a story. A woman told me she had cancer that went untreated because her doctor told her that the problem was her weight. She went in for an appointment because she was experiencing excruciating menstrual cramps and very heavy periods. She was afraid. Rather than examining her, the doctor told her that if she lost weight that everything would be fine. Had the doctor been willing to take her seriously, she could have found the lump in her uterus, but instead it grew unchecked for another three years. And I was reminded of my own childhood and my education in body shame that sought to steal from me the most precious thing I would ever have: the inherent magic of being alive and the vehicle through which that magic is experienced, my body.

The perpetrators of these stories are body shame, fatphobia, and dieting, which hide behind the seemingly innocuous language of “self-improvement,” “inspiration,” and “health.” In many ways, however, these ideas are merely symptoms of a larger cultural problem, not least our country’s history of unresolved racism, white supremacy, classism, and misogyny.

While we have spent the last twenty-five years cleaning up the sexist residue in our vocabulary, we have been living out womanhating methods of control via our dinner plates and our bathroom scales—often not even knowing that this is what we are doing. We are giving away our lives, our time, our energy, our claim to pleasure, our desire, and our power one bite at a time. Submission has taken on a new face: where once there was barred access to meaningful employment and the right to vote, sexism today has morphed into skipped meals and too many hours spent at the gym. As Naomi Wolf famously wrote in The Beauty Myth, “Dieting is the most potent political sedative in women’s history.”

I promise you that everything I tell you here is the truth, as well as I can tell it, of my seven years spent researching diet culture and fatphobia. I promise you that I don’t have an agenda besides my deepest desire that reading this book will leave you with some tools to combat this horrible assisted femicide masked as diet culture. I will admit that I want you to get super pissed off that you have been lied to and that there are cultural forces actively attempting to dismantle the most precious parts of your selfhood right now—and then getting you to pay for that violent process. It is only when we stop lying to ourselves that we can stop being lied to by others. It is only when we trust our own experience of the truth that we can be free.

Diet culture seeks to undermine that very thing: self-trust—our inner compass, that reptilian and prehistoric guide living inside us, our greatest inheritance accumulated over generations of living on this planet. 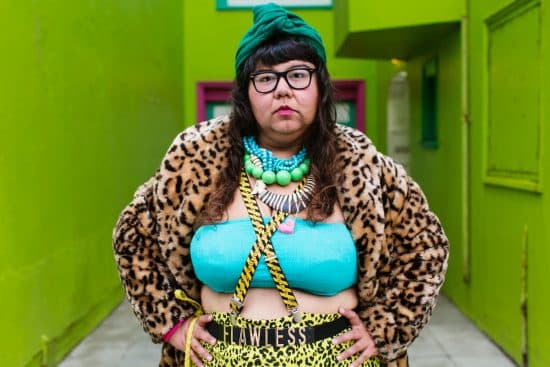 And that’s why I wrote this book. I write from a place of professional and personal investment. Professionally I am a body-image expert, lecturer, and author, as well as a scholar in the emerging discipline of fat studies. Personally, I am a fatshionista, a vociferous activist, a lover of creamy pastries, a world traveler, a potty mouth, and a San Francisco bohemian who loves pedicures, cheetah print, and Chihuahuas, and who couldn’t live without mimosas, huge sunglasses, tiny bathing suits, and my Hitachi Magic Wand. I am also a 250-pound woman who chose to stop dieting because I wanted to start living my life rather than continue dreaming about it.

I used to believe that I was afraid of food and of being fat, but now I know that the fear was of a deeply troubled culture that would not allow me to thrive. A culture that was, in fact, invested in my degradation.

It is with great urgency that I write to women directly. Whatever I tell you in the following pages is told with the greatest desire to see women live the life we all deserve to live—the life that our wider culture will never grant you, the one that you must take. The key to that life is the unbridling of our desire. This culture teaches us to extinguish that desire the moment we are taught that women shouldn’t be fat. I say, you have the right to remain fat.

This excerpt has been republished from the newly released book You Have The Right To Remain Fat with full permission. Get a copy of the book here.